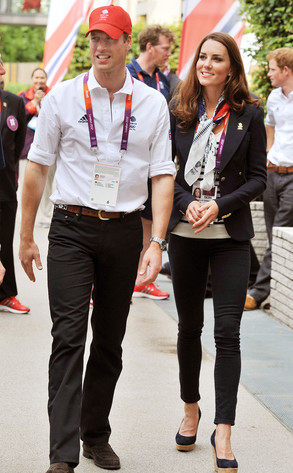 As if Olympians didn’t already feel like winners. They got a double triple dose of the royal treatment yesterday, when Team GB’s foremost cheerleaders, Prince William, Kate Middleton and Prince Harry, descended into Olympic Village and met with members of the England squad.

How’s that for some queen and country motivation? We can practically hear the squeals from here—about the royal whee!

The trio casually strolled into the atheles’ village, with Wills going for sporty-chic in a kicky red Olympics hat and his official Team GB white polo, and Kate still in the striped-shirt-and-blazer attire she wore while cheering on royal cousin Zara Phillips to her silver medal win.

The duke and duchess met with Team GB cyclist Victoria Pendleton and greeted a whole slew of other athletes who were on the grounds. And those who weren’t so lucky? They had gathered on their balconies overlooking where the trio were, waving to and cheering on the royals as they passed through the compound in London’s East End.

Cheerleaders at the Olympics? Here’s why you’re seeing so many…

During the surprise visit, Harry also met with members of the Australian team and walked away with a stuffed kangaroo. Make that a stuffed kangaroo sporting boxing gloves. They also ventured inside, with Will and Harry touring the quarters of the women’s handball players and engaging in the adorably obligatory brotherly ribbing over who knew less about the sport. (Advantage: Harry.)

Meanwhile, the royal rounds continued today, as Will and Harry served as spectators for the rowing event, turning up to their old school grounds, Eton’s Dorney Lake, to watch the British women claim England’s first gold of the games.

Clearly they put the cheer in pip, pip, cheerio.