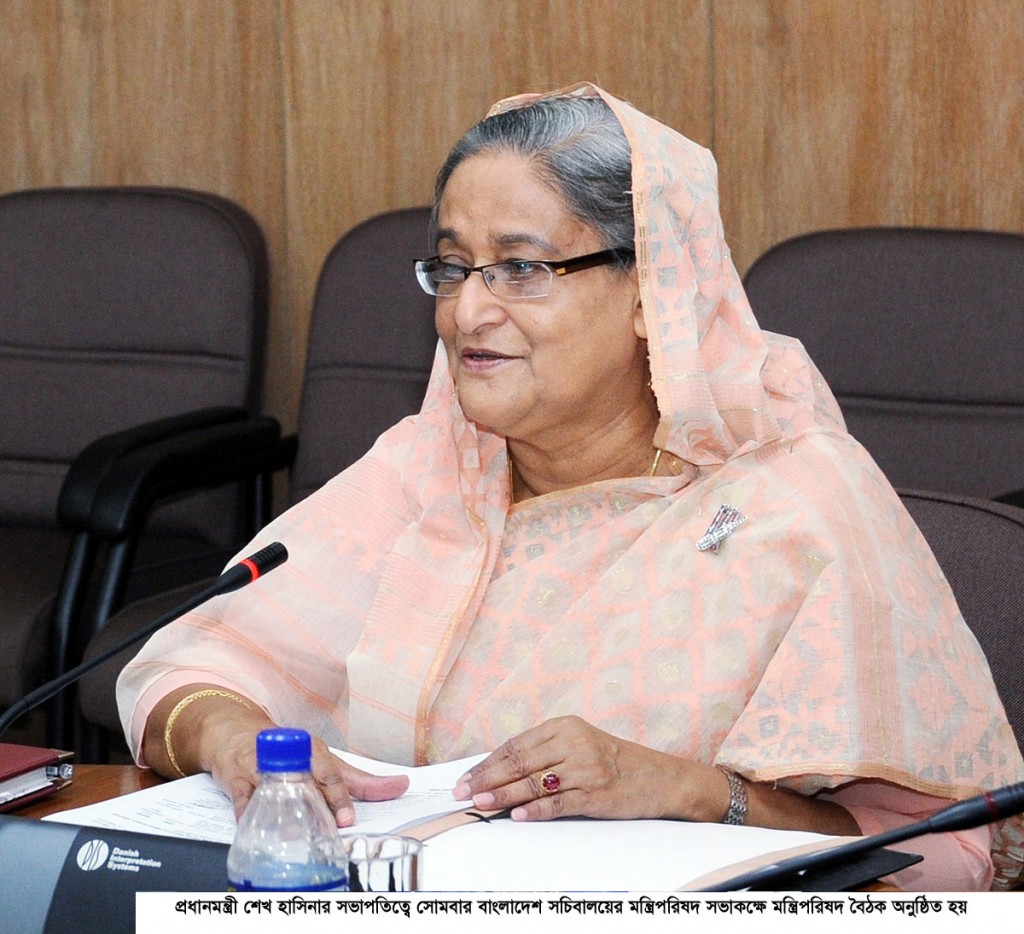 e-News® | The NEWS Company…Dhaka, April 20, 2015 : Prime Minister Sheikh Hasina today asked district administrative officials and police to make all out efforts to maintain law and order to carry forward the ongoing development programmes. In this regard she asked the officials to continue the joint operation of the law enforcing agencies to arrest each and every culprit of the recent violence so that they cannot repeat such occurrences and sabotage in future.

“You must be always prepared to protect the people and continue the operation until every criminal is vanished,” she said. The Prime said this while talking to District Development Coordination Committee of Manikganj and Sunamganj through a video conference from Bangladesh Secretariat today. Sheikh Hasina asked the officials to implement the ongoing development progarmmes according to the stipulated timeframe and said the government has a plan to develop every district as a self-reliant administrative unit, giving focus on the resources for which every district is well-known and using those resources for development of the people of the district.

She said every district has to take long-term development plan considering the needs of the people for at least 20 years. She said every district must take steps for utilization of the resources for welfare of the people of the district. No arable land should be kept without cultivation. People should be given support to set up small and medium scale industries particularly food processing industries, she said. Women should be encouraged for education and income generating services where they still remained neglected, she added.

Sheikh Hasina asked the officials to respond quickly to the needs of the people after any natural disaster particularly nor’wester twister lashing out different parts of the country. She also asked them to make list of the people who lost their homes by river erosion to rehabilitate them in the government ‘khas’ land. Pointing out the last three-month long volatile politics of BNP and Jamaat in the name of movement the Prime Minister said they choose the path of destruction when the country was moving ahead and we were getting appreciation from world community for our visible success in different areas.

Sheikh Hasina asked the district administration to give more importance to socio-economic development of the districts saying poverty alleviation and creation of employment opportunities are government’s first priority. The Prime minister also talked to the members of the District Development Coordination Committee of Munshiganj, Madaripur and Habiganj districts and officials of Dhaka and Sylhet divisions who remained connected during the video conference.

Sheikh Hasina aid Manikganj is the home of many renowned people. A private university would be constructed in Manikganj, she announced saying all potentials of the districts should be made useful. The Prime Minister also announced that a power plant would be constructed and a specialized economic zone would be set up at Aricha as the place now remained vacant after shifting the ferry ghat to Dowlatdia. A stadium would also be constructed in Manikganj, she said asking the officials to select a suitable place which will be easy to communicate with Dhaka.

Talking to the Sunamganj District Development Coordination Committee, the Prime Minister asked the officials to take steps to exploit vast resources of the district including tourism opportunities of the scenic district. “Though many people of Sunamganj live abroad, but development of the area is not satisfactory,” she observed saying local elected representative would have to take more active role for development of communications and economy.

Sheikh Hasina laid importance on development of food process industries in Sunamganj saying many expatriate nationals who have restaurants abroad can import the processed fishes and foods. The government has approved a project to support the intending entrepreneurs in this regard, she said. Solar power could be a useful resource for the remote haor areas where gridline electricity is difficult to connect, she said.

The Prime Minister called for preservation of mass graveyards of 1971 to allow the new generation about the country’s history.