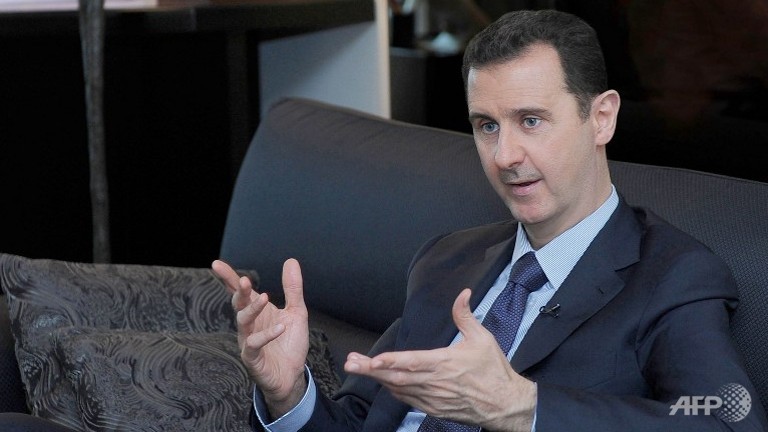 WASHINGTON, Sept 19, 2013 (AFP) – Defiant strongman Bashar Al-Assad promised Wednesday he would surrender Syria’s chemical weapons but warned it would take at least a year to do so and cost one billion dollars.

His latest appearance came as UN envoys debated a draft resolution that would enshrine a joint US-Russian plan to secure and neutralize his banned weapons in international law.

In a confident interview with US network Fox News, Assad insisted that Syria was not gripped by civil war but was the victim of infiltration by foreign-backed Al-Qaeda fighters.

He insisted that his forces had not been behind an August 21 gas attack on the Damascus suburbs that left hundreds of civilians dead, but vowed nevertheless to hand over his deadly arsenal.

It was Assad’s second interview this month with US television, and one of a series of meetings with Western journalists to counter mounting political pressure from Western capitals.

But — with US lawmakers and the Western public not sold on the virtues of another Middle East military adventure — Assad’s ally Russia seized the opportunity to propose a diplomatic solution.

Pushed by President Vladimir Putin, the White House agreed to hold fire while Russia and the international community — with Assad’s agreement — draws up a disarmament plan. Assad reiterated his pledge to cooperate, but insisted he had not been forced to do so by US threats of US action.

“I think it’s a very complicated operation, technically. And it needs a lot of money, about a billion,” he told Fox.

“So it depends, you have to ask the experts what they mean by quickly. It has a certain schedule. It needs a year, or maybe a little bit more.”

Asked why he had used force to repress a popular uprising and triggered a two-and-a-half year war that has claimed 110,000 lives, Assad insisted Syria was a victim of terrorism.

“What we have is not civil war. What we have is war. It’s a  new kind of war,” he said, alleging that Islamist guerrillas from  more than 80 countries had joined the fight.

“We know that we have tens of thousands of jihadists… we  are on the ground, we live in this country,” he said, disputing  an expert report that suggested 30,000 out of around 100,000 rebels were hardliners.

“What I can tell you is that … 80 to 90 percent of the  underground terrorists are Al-Qaeda and their offshoots.” Assad admitted that at the start of the uprising there were non- jihadist rebels, but alleged that since the end of 2012,  Islamic extremists had become a majority. He added that “tens of thousands of Syrians” and 15,000 government troops had been killed “mainly because of the terrorist attacks, assassinations and suicide bombers.”

While Assad pursued his media counterattack, the five UN Security Council powers held new talks on a resolution backing the Russia-US plan to destroy the chemical weapons. Western nations, who said they are not looking for an  immediate threat of force against Assad, could seek a Security Council vote this weekend if Russia agrees.

UN envoys from the United States, Russia, France, Britain  and China held two hours of talks at the US mission. “There is no accord yet, there will be more negotiations,”  said one UN diplomat.

The disarmament plan will face its first big test on  Saturday, the one-week deadline announced by Moscow and the  United States for Assad to provide a list of his chemical  facilities.

Assad said in his interview that he could provide a list  “tomorrow,” and Moscow said it had received assurances that he  would cooperate.

Britain, France and the United States have prepared a draft  resolution that would invoke Chapter VII of the UN Charter but  would not explicitly threaten force or sanctions. Without giving details of the draft, Britain’s UN ambassador  Mark Lyall Grant said the Western powers want to use Chapter VII  to make the Russia-US plan binding under international law.

Russian Foreign Minister Sergei Lavrov said when he struck  the deal with US Secretary of State John Kerry that it would be  backed with a UN resolution under Chapter VII but has since  questioned its use.

Meanwhile, the situation on the ground became still more  complex and dangerous, when — according to residents — an Al-  Qaeda front group overran a Syrian border town.

“The Islamic State of Iraq and the Levant (ISIS) has seized  complete control of Azaz. They are in control of the town’s  entrances,” said Abu Ahmad, an activist inside the town.

The development in Azaz comes amid increasing reports of  fighting in northern Syria between ISIS and non-jihadist rebels  vying to bring down Assad’s regime.

Syria’s conflict has grown highly localized, and ISIS has  fought side by side with rebels against government troops in  other areas of the country.

The opposition is highly fragmented and Russia has supported  Assad’s claim that the rebels were behind the poison gas attacks.

Washington rejects that claim out of hand.

State Department spokeswoman Marie Harf said: “We have seen  no credible reporting, no credible evidence that the opposition
used chemical weapons in Syria, period.” And she warned Damascus must quickly “submit a full  accounting” of its chemical stockpile.