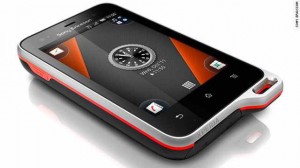 Sony Ericsson’s new smartphone was made for two kinds of people: sporty jogger types and those who sweat profusely.

The Active probably won’t withstand a dip in the lap pool (or an accidental drop in the toilet). It’s aimed more at those who want to browse the web while on the treadmill, or perhaps check out their Runkeeper stats while taking on their latest triathlon.

One word of advice, though: last time we checked, it’s still not kosher to talk on your phone at the gym.

Along with the Active, Sony Ericsson also unveiled the Xperia Ray, a fairly bland, run-of-the-mill Android smartphone. It comes with a 1-GHz processor, 3.3-inch screen and 8.1-megapixel back-facing camera.

Sony Ericsson unveiled the devices at the CommunicAsia tech conference in Singapore on Wednesday.

Over the past few years, hardware manufacturers have been pushing out new Android smartphones to the public at a breakneck pace. The problem, however, is that most of the phones have similar hardware specifications, with little else for consumers to differentiate between each device.

Handset makers have tried adding on different layers of software (or “skinning”) over the stock version of Android in order to give a different look and customized feel to its phone. But not all custom skins have proved popular with smartphone enthusiasts, and some prefer a bare-bones approach to the operating system.

Sony Ericsson has taken a different path by releasing novel hardware designs with minimal software modification. The company’s recent release of the Xperia Play (or “PlayStation phone”) included a built-in, slide-out PlayStation controller interface, the first of its kind seen on a smartphone.

The release of the Xperia Active is in the same vein as the Play — curveball additions to the company’s smartphone line-up which aim to break from the indistinguishable crowd of available devices.

The two phones are expected to be available this fall.

20 TV Shows With the Most Social Buzz This Week