NASA rover closing in on Mars to hunt for life clues 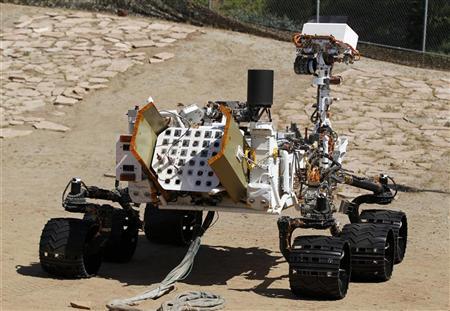 NASA’s Mars rover was on its final approach to the red planet on Sunday, heading toward a mountain that may hold clues about whether life has ever existed on Mars, officials said.

The rover, also known as Curiosity, has been careening toward Mars since its launch in November. The nuclear-powered rover the size of a compact car is expected to end its 352-million-mile (567-million-km) journey on August 6 at 1:31 a.m. EDT.

The landing zone is a 12-mile-by-4-mile (20-km-by-7-km) area inside an ancient impact basin known as Gale Crater, located near the planet’s equator. The crater, one of the lowest places on Mars, has a 3-mile-high (5-km-high) mountain of what appears to be layers of sediment.

Scientists suspect the crater may have once been the floor of a lake.

If so, they believe that sediments likely filled the crater, but were carried away over time, leaving only the central mound.

Readying to travel the last stretch to its landing site, Curiosity fired its steering thrusters for six seconds early Sunday, tweaking its flight path by 0.4 inches (1 centimeter) per second.

“I will not be surprised if this was our last trajectory correction maneuver,” chief navigator Tomas Martin-Mur, with NASA’s Jet Propulsion Laboratory in Pasadena, California, said in a statement.

Curiosity is expected to hit the top of the Martian atmosphere at 1:24 a.m. EDT on August 6. If all goes as planned, seven minutes later the rover will be standing on its six wheels on the dry, dusty surface of Mars.

Landing is by no means guaranteed. To transport the one-ton rover and position it near the mound, engineers devised a complicated system that includes a 52-foot (16-metre) diameter supersonic parachute, a rocket-powered aerial platform and a so-called “sky crane” designed to lower the rover on a tether to the ground.

NASA last week successfully repositioned its Mars-orbiting Odyssey spacecraft so that it would be able to monitor Curiosity’s descent and landing and radio the information back to ground controllers in as close to real time as possible.

Earth and Mars are so far apart that radio signals, which travel at the speed of light, take 13.8 minutes for a one-way journey.