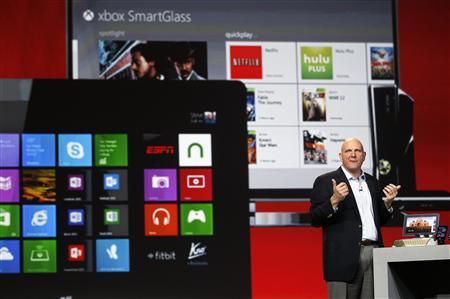 Microsoft Corp’s quarterly profit edged lower as Office software sales slowed ahead of a new launch, offsetting a solid but unspectacular start for its Windows 8 operating system and sending the company’s shares down 1.4 percent.

The results mark a stark change from the 1990s, when Microsoft was the unchallenged king of computing and the release of a new Windows operating system would supercharge sales, generate excitement and generally boost its stock.

None of that appears to be true now, as Microsoft has been overtaken by Apple Inc and Google Inc in the rush toward mobile computing, while sales of traditional desktop computers are in decline.

“There’s still no sign that Windows 8 is a gangbuster,” said Andrew Bartels, an analyst at Forrester Research. “Compared to prior periods, where you saw a big increase when a new one came out, you’re not seeing that.”

Wall Street had expected 75 cents per share, on average, according to Thomson Reuters I/B/E/S.

The biggest factor weighing on Microsoft was a 10 percent decline in sales at its Office unit to $5.7 billion, which took into account the loss of deferred revenue relating to discounted upgrades to the new version of the software, expected shortly.

“It’s a pause before a product launch, which is typical,” said Josh Olson, an analyst at Edward Jones.

Windows sales jumped 24 percent to $5.9 billion, slightly ahead of analysts’ average expectations, which had been gradually lowered over the last few months. That also included some deferred revenue relating to discounted upgrades.

Microsoft said it has sold more than 60 million Windows 8 licenses since its late-October launch, an unexceptional start for a product which has not gripped the public’s imagination in the way of Apple’s iPad.

“Windows 8 continues to have an uphill battle in convincing investors this is going to be the key to the growth story for Microsoft,” said Daniel Ives, an analyst at FBR Capital Markets. “It continues to be a major prove-me product cycle.”

Microsoft did not detail sales of its new Surface tablet – a direct competitor to the iPad – although chief financial officer Peter Klein said the company was expanding production and distribution.

“Demand is stronger than supply across a number of key device types, whether Windows tablets, convertibles, or all-in-ones,” Tami Reller, chief financial officer of Microsoft’s Windows unit, told Reuters earlier this month. “Most of the opportunity is still ahead of us.”

Analysts seem prepared to give Microsoft more time to prove its point.

“It’s been disruptive but the PC market is far from dead,” said Colin Gillis, an analyst at BGC Financial. “Even if they have minimal success with Surface, they don’t need much to move the needle.”

Microsoft shares have fallen 2 percent since Windows 8 was launched on October 26, compared to a 5 percent gain in the tech-heavy Nasdaq composite index. They fell to $27.06 in after-hours trading, after closing at $27.23 on Nasdaq.

The Highest-Paid Software Engineers In TecH