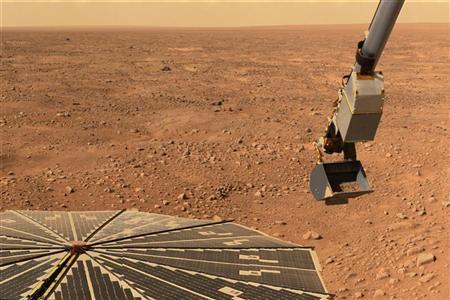 British scientists believe microscopic worms which are biologically very similar to humans may be the key to helping humans colonize other planets like Mars by giving clues on coping with long-term space living.

A team of scientists led by Nathaniel Szewczyk from Notthingham University blasted 4,000 of the worms, known as known as Caenorhabditis elegans, or C. elegans, into space on board the Space Shuttle Discovery, and studied their progress.

Many experts — including astrophysicist Stephen Hawking — believe the ultimate survival of humanity could be dependent on the human colonization of other planets.

“While this sounds like science fiction, it is a fact that if mankind wants to avoid the natural order of extinction then we need to find ways to live on other planets,” Szewczyk said in a statement about his research.

But there are some major challenges associated with long-term space living — including high levels of radiation exposure and rapid loss of bone strength.

In a study published in Interface, a journal of The Royal Society, Szewczyk’s team found that in space, their worms developed from egg to adulthood and produced offspring just as they do on earth.

This makes them an ideal and cost-effective experimental way to study the possible effects of long-term and long-distance space exploration in humans, they said.

The researchers were able to successfully monitor the effect of low Earth orbit (LEO) on 12 generations of C. elegans during the first three months of a six month voyage on the International Space Station.

“While it may seem surprising, many of the biological changes that happen during spaceflight affect astronauts and worms and in the same way,” Szewczyk said.

“We have been able to show that worms can grow and reproduce in space for long enough to reach another planet and that we can remotely monitor their health.”

C. elegans was the first multi-cellular organism to have its genetic structure completely mapped, and many of its 20,000 genes have the same functions as those in humans, Szewczyk’s team explained in their study.

Around two thousand of these genes play a role in promoting muscle function and 50 to 60 percent of these have obvious human counterparts, they said.

The C. elegans worm has long been used by scientists to help further the understanding of human biology, so now Szewczyk thinks it could help researchers investigate living on Mars.

Szewczyk’s team worked with experts at the Universities of Pittsburgh and Colorado in the United States and the Simon Fraser University in Canada, to develop a compact automated C. elegans culturing system which could be monitored remotely for the effects of environmental toxins and in-flight radiation.

“Worms allow us to detect changes in growth, development, reproduction and behavior in response to environmental conditions such as toxins or in response to deep space missions,” Szewczyk said.

“Given the high failure rate of Mars missions, use of worms allows us to safely and relatively cheaply test spacecraft systems prior to manned missions.”