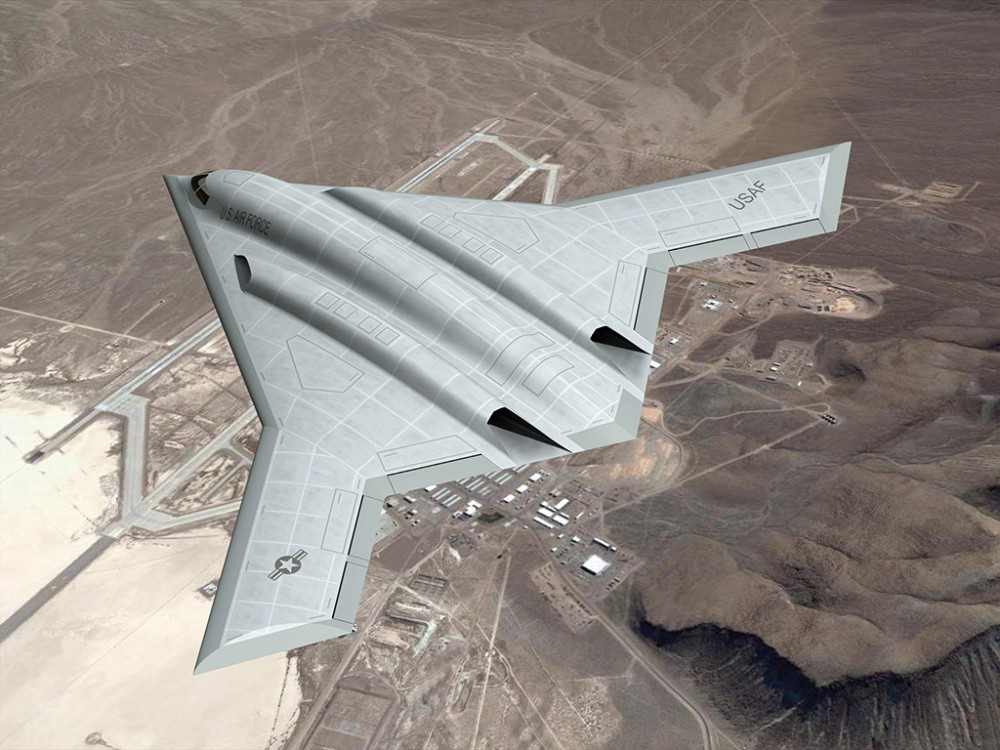 e-News® | The NEWS Company…October 31, 2015 : winner of the Long-Range Strike Bomber (LRS-B) contest, beating a rival team with six times its annual sales. The U.S. Air Force announced Oct. 27 that Northrop Grumman beat a Boeing/Lockheed Martin team in a competition to develop and build 100 of the bombers, which are expected to reach initial operational capability in the mid-2020s. The Pentagon says the next phase of the work, engineering and manufacturing development (EMD), should cost $21.4 billion in 2010 dollars, including the delivery of an unspecified number of test aircraft.

Another $1.9 billion has already been spent on risk reduction, bringing both competing teams through the initial design phase. In 2016 dollars, the estimated EMD cost is $23.5 billion, the Pentagon says. The B-2 cost $37.2 billion to develop in 2016 dollars.

The Air Force also says that the average procurement unit cost for the Northrop Grumman bomber (which does not have a formal designation yet) will be $511 million in 2010 dollars, assuming a 100-aircraft buy ($564 million in 2016 dollars). This figure, the result of two independent Pentagon estimates, is lower than the $550 million (2010 dollars) goal that was set in 2011, when then-Defense Secretary Robert Gates approved the start of the program.

Northrop Grumman’s contract includes fixed-price incentive options for the first five batches of low-rate initial production aircraft, comprising 21 bombers. The price for those aircraft (which will be higher than the average) has not been disclosed. Through production, the program has been estimated to represent $80 billion in business. The LRS-B is expected to be operational in the mid-2020s. The exact date will depend on initial operational capability criteria, such as a certain number of aircraft in service, which are still to be determined by the Air Force’s Global Strike Command.

The stakes for LRS-B were so huge that industry analysts have long predicted that the losing bidder would protest the award. Boeing is no stranger to that tactic. In 2008, the company successfully protested the Air Force’s 2008 award of a contract for refueling tankers to a Northrop-EADS team and ultimately won the contract in a second competition. Boeing and Lockheed Martin said in a joint statement that they were “disappointed by today’s announcement (and) interested in knowing how the competition was scored in terms of price and risk.” The Air Force says it will start debriefing the loser on Friday, and there is a 100-day period in which to lodge a protest.

“The Air Force has made the right decision for our nation’s security,” said Wes Bush, Northrop Grumman president, chairman and CEO. “Our team has the resources in place to execute this important program.”

For the time being, however, the make-up of Northrop Grumman’s team is a secret, as are most attributes of the program. Not even the engine subcontractor is disclosed, although the Air Force said today that all major subsystems have been selected. Although most analysts agree it is overwhelmingly likely that the bomber will resemble a smaller cousin of the B-2, a blended wing-body aircraft with two engines and an unrefueled radius of action of around 2,500 nm, no such details have been confirmed.

Details of the selection process also remain highly classified, but it is likely that the winning bid rested on Northrop Grumman’s operational experience with wide-band, all-aspect stealth technology on the B-2 bomber and the still-secret RQ-180 intelligence, surveillance and reconnaissance (ISR) unmanned air vehicle.

But the winning formula was most likely not just a question of delivering more stealth or more range. In LRS-B, the winner had to meet a complex set of requirements that stress risk reduction, an open systems architecture, agile management and manufacturing technology.

The LRS-B contest was unique in three particularly important ways. First, the requirement had emerged from the ashes of the previous Next-Generation Bomber program (NGB), canceled in April 2009, with its goals scaled down and schedule stretched out, and unit cost as a key performance parameter (KPP).

A third key feature of the LRS-B is that its management has been assigned to the Air Force’s Rapid Capabilities Office (RCO), which, Air Force acquisition chief William LaPlante said Oct. 21, has “an incredible track record of delivering eye-watering capabilities—not just one-offs, but things going into production.”

Significantly, LaPlante describes the 80-strong LRS-B project office within the RCO as like the team that produced the Lockheed F-117 stealth fighter 35 years ago: “A small empowered group of warfighters, acquisition people and maintainers.” Although the RCO’s only acknowledged aerospace platform is the Boeing X-37B spaceplane, its technical focus can be gauged by the fact that a 2012 recruitment notice for its deputy director identified only three mandatory areas of “significant experience . . . low-observables, counter low-observables and electronic warfare.” Like the F-117, the LRS-B is apparently designed to meet its goals with mature subsystems in a new platform.

However, LaPlante added, the RCO team has substantial oversight from the Pentagon, Congress and Government Accountability Office, and the program incorporates red team/blue team exercises to validate it against possible threats.

The LRS-B contest set an average procurement unit cost of $550 million—in fiscal 2010 dollars based on building 100 aircraft—as a KPP. “The risk is that you pick the wrong number. If you have firm requirements and do the analytics, you have a shot at pulling that off,” LaPlante says.

Some of the key technologies in the LRS-B are both secret and mature. “Not only have some technologies been wind-tunnel-tested, prototyped or flown—some of them have been used operationally,” LaPlante said Oct. 21.

However, LaPlante also emphasized that delays and overruns cannot be eliminated. “Integration is always a risk,” he said, “and we have put together a schedule with the right margins to accommodate delays.”

LRS-B, too, is planned to be upgraded easily and competitively, “with space and weight provision for things we can’t imagine today,” LaPlante said. Open architecture, he said, could allow the Pentagon to procure a new or upgraded subsystem competitively, “provide it to the prime and say, integrate this.” Along with the cost of maintaining the bomber’s low-observable systems, upgrades will account for a large proportion of the bomber’s life-cycle cost—which will be much greater than its procurement bill.

There is one other way in which LRS-B will differ from other programs: its production rate. The number is based on a “fundable profile, without the big ramp-up you see on F-35,” LaPlante said. “We have set it up to be resilient,” with affordable annual funding. “That would be $550 million times your production rate, which might be seven or eight per year,” he said. The rate is much lower than recent combat aircraft programs but also means the line will be moving until almost 2040. Many bomber advocates quietly argue that if LRS-B delivers, and Asia-Pacific operations remain important, the Air Force will need more than 100 of the bombers.

But the fact that they were allowed to team for NGB and then re-form the team for LRS-B indicated that the Pentagon leadership did not see this as an impediment to a fair fight. Rules have changed, too. Briefing reporters Oct. 21, LaPlante emphasized the importance of independent cost estimates—produced by the Pentagon’s Cost Assessment and Program Evaluation (CAPE) directorate—under the 2009 Weapon Systems Acquisition Reform Act. “All programs have an independent estimate, and we are funded to that level,” LaPlante said. Nor is the estimate a single review process: The program office has been briefing CAPE estimators from the outset.

The development cost quoted today is the independent cost estimate, not the winner’s or program office’s estimate. The goal is to make underbidding less likely and less effective.

Not only did Boeing and Lockheed Martin outgun their rival fiscally, but they were also teamed on a government-funded demonstrator aircraft, identified as the Next-Generation Long-Range Strike Demonstrator, under an effort that started in the early days of NGB and continued after the ambitious bomber was canceled. The stealth-technology group within Boeing’s Phantom Works, headed by Alan Wiechman, led the low-observables side of the program, although Lockheed Martin’s Skunk Works built the airframe.

Alongside stealth, Phantom Works pioneered the use of new manufacturing technology. This has led to the closely held Boeing-wide initiative known as Black Diamond, which was identified this summer as a possible major competitive advantage in LRS-B.

Lockheed Martin brought its experience with stealth systems integration to the party. But the history of the F-22—where upgrades have been constrained by a tightly integrated architecture, so that every change requires painstaking regression testing to ensure that other functions are not affected—was exactly what the LRS-B program’s open architecture is designed to avoid.

While Northrop Grumman may have shared some NGLRS-D technology, the most important experience that company brought to the table may well have been the RQ-180. From conversations with industry sources, it appears that one of the major breakthroughs in the design of this very stealthy, high-altitude UAV was its combination of stealth with aerodynamic and propulsive efficiency, largely the result of better computational fluid dynamics (CFD) and computational electromagnetics (CEM).

The B-2 had achieved a high level of stealth, but the design was a difficult compromise between stealth and aerodynamics, and the complex shape of the center body and wing section, with strongly three-dimensional stream and shock patterns, pushed the state of the art in both computer modeling and testing. Given its high fuel fraction, its 6,000-nm unrefueled range showed that, at best, its efficiency was no better than that of the B-52.

In sharp contrast, some early-2000s Northrop Grumman designs were described by one engineer as having “sailplane-like” efficiency. While the RQ-180 will almost certainly be shown to be a much lighter aircraft than the LRS-B, its wingspan is likely quite close to that of the bomber, and its development will have validated the CFD and CEM codes used in the design, along with radar-absorbent materials and coatings. The UAV will also be providing operational experience with new stealth technologies, underpinning Northrop Grumman estimates of the LRS-B’s operating cost.

While Lockheed Martin’s RQ-170 UAV is widely considered to have been an RCO program, meaning that all three aircraft companies in the LRS-B competition have worked with RCO, the RQ-180 experience would be most relevant.

Despite the B-2’s reputation for high cost, Northrop Grumman says its experience with the program was a plus. “It is behaving like a legacy aircraft now,” says one company executive, with flight-hour costs that are not out of line with other small-volume fleets of large aircraft in the Air Force. Operating costs for such aircraft, the company says, seem to be driven by fixed costs and by the inevitably slow learning curve for depot-maintenance visits. Each B-2 today goes into depot for 12 months every nine years. At the same time, the B-2’s signatures “have improved significantly” through the use of new materials.

Northrop Grumman has also made a radical move to contain its costs, although its impact on the LRS-B bid is uncertain: Under the codename Project Magellan, it has established a manned-aircraft center of excellence in Melbourne, Florida. Across the U.S. combat-aircraft business, this represents a reversal of a decades-long consolidation that has seen major engineering locations dwindle to three centers: Los Angeles/Palmdale, St. Louis and Fort Worth. The company has already opened a new 220,000-sq.-ft. building in Melbourne and has plans for another new 500,000-sq.-ft., 1,500-person facility by 2019.