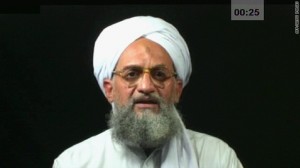 A frame grab from a videotape aired 05 August 2006 on the Al-Jazeera television network shows Ayman al-Zawahiri.

Ayman al-Zawahiri has been appointed the new leader of al Qaeda, according to a statement posted on several jihadist websites.

Al-Zawahiri has played a defining role in al Qaeda for more than a decade as Osama bin Laden’s deputy. Even before the announcement, he had been widely regarded as the organization’s de facto leader.

The announcement, dated June 2011 but which surfaced Thursday on the sites, said the decision to appoint al-Zawahiri was made to pay respect to the “righteous martyrs” and to honor the legacy of bin Laden.

Bin Laden was killed in a U.S. raid on his compound in Abbottabad, Pakistan, last month.

The statement cannot be authenticated by CNN, but it appeared on radical Islamist sites known for posting similar statements and recruitment videos by other al Qaeda figures.

“Hereby the General Command of the Qaida al-Jihad — and after the end of the consultations — we declare that Sheikh Dr. Abu Muhammad Ayman al-Zawahiri (May God bless him) will take over the responsibility of command of the group,” the statement said.

The statement also said the group will not shift its policy and pledged its support to, among others, Mullah Omar and the Taliban as the latter battles U.S. and NATO presence in Afghanistan.

It, however, makes no mention of the pro-democracy uprisings that have roiled several Arab countries and forced the exit of some longtime leaders.

Former CIA Officer Phil Mudd agreed and said al-Zawahiri was not as respected.

“Very poorly respected,” Mudd said. “He is seen as a difficult man to work with. He has no sense among the work force in al Qaeda, the kind of prestige that bin Laden had.”

Born into a wealthy family in Cairo, al-Zawahiri is a physician and founding member of the Egyptian Islamic Jihad (EIJ), a militant organization that opposed the then secular Egyptian government of Hosni Mubarak and sought its overthrow through violent means.

Like bin Laden, al-Zawahiri also went to Afghanistan during their fight against the Soviets, although he was there primarily to offer his medical expertise.

By the 1990s, he again refocused his attention on undermining and attacking the Egyptian government and, eventually, the U.S.

In 1998, when the Egyptian Islamic Jihad effectively merged with al Qaeda, he sent a fax to the Al-Hayat newspaper warning Americans.

The FBI is offering a $25 million reward for information leading to his capture — the same as the reward for bin Laden — reflecting al-Zawahiri’s importance to the United States.