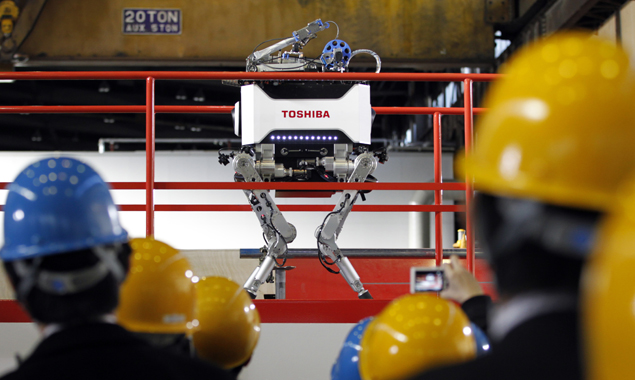 A Japanese robot designed to withstand high levels of radiation and extreme heat at damaged nuclear plants such as Fukushima froze on Wednesday on its first public demonstration.

Despite being home to the largest number of industrial robots in the world, Japan did not have a device capable of entering the damaged Fukushima nuclear facility after last year’s devastating earthquake and tsunami.

Instead, Japan brought in U.S. robots to survey the extent of the damage inside the reactor buildings.

Toshiba Corp unveiled Japan’s own nuclear-proof robot on Wednesday, a four-legged device able to carry up to 20 kg of equipment and capable of lifting itself up if it falls over on uneven surfaces and amid debris.

During the demonstration, the robot experienced a case of stage fright. The shuffling Tetrapod locked up and suddenly froze after it tried to balance itself, forcing technicians to carry it away.

It is the second time such Japanese robotic technology has experienced problems. Last October, a crawling robot developed by the Chiba Institute of Technology lost connection with operators and was abandoned inside Fukushima’s No. 2 reactor building.

Relations with WB to reach a new height: Muhith

Texting most popular 20 years on