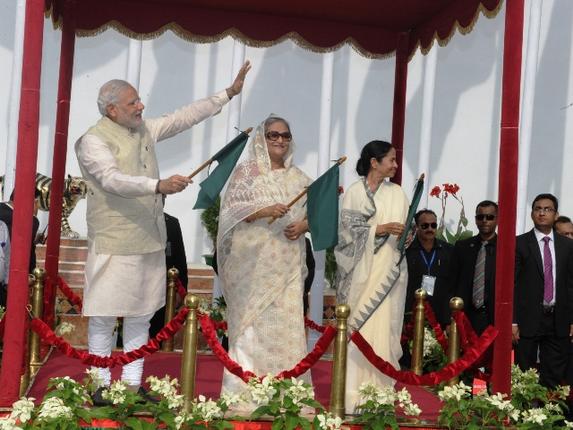 At an attractive programme attended by senior officials of the two countries on the premises of Prime Minister Office (PMO), the two prime ministers and the chief minister of West Bengal inaugurated the bus services. As Narendra Modi and Momata Banerjee arrived at PMO in the same car at 3.40 pm Prime Minister Sheikh Hasina warmly received them with bouquet of flowers.

Then they proceeded to the Kolkata-Dhaka-Agartala bus and exchanged pleasantries with the passengers. Thereafter they got in the buses of Agartala-Dhaka-Kolkata and Dhaka-Shilling-Guwahati routes and greeted the passengers. The two prime ministers and West Bengal Chief Minister then went to the decorative dais where Sheikh Hasina symbolically handed over the ticket of Dhaka-Shilliong-Guwahati bus to Indian Prime Minister Narendra Modi.

Prime Minister Modi and Chief Minister Mamata also symbolically handed over the tickets of Agartala-Dhaka-Kolkata bus and Kolkata-Dhaka-Agartala bus to Prime Minister Sheikh Hasina. Later, the two prime ministers and chief minister waived flags for all the three buses to move on.

Russia will launch attacks in Syria : US intelligence