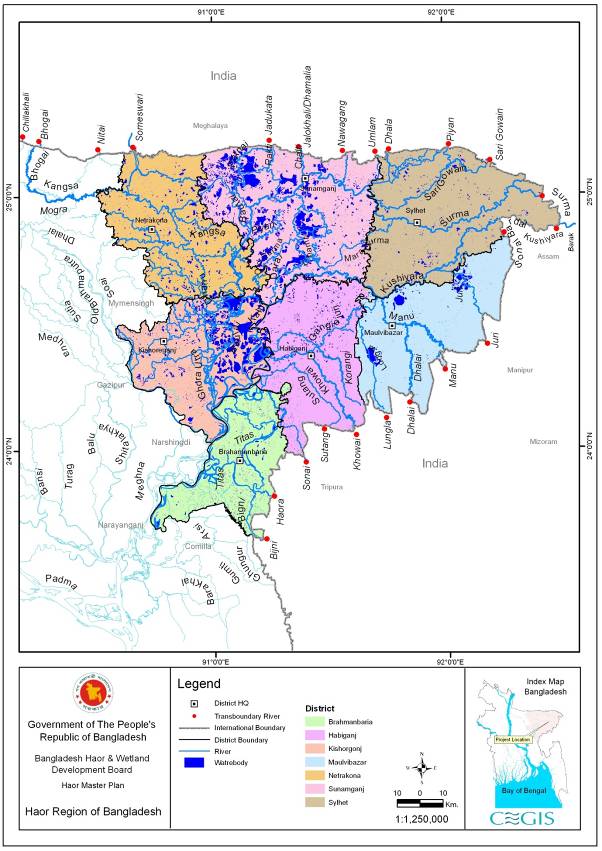 Haors  and Baors are the last stronghold of freshwater biodiversity gene bank in Bangladesh surviving by its own despite negligence   in appropriate conservation and sustainable development measures in wetlands management.

Haor is a great reservoir of aquatic biological resources and acts as the ecological safety net to the nature as well as to the dwellers of the haor. But in reality, these areas are considered as wastelands and to make these wastelands into a productive one, a one sided plan has been implementing since long. The programme is popularly known as Flood Control, Drainage and Irrigation (FCDI ) which is mainly devoted to increase the monoculture rice production.  However, in fact haor ecosystem is a multiple-resource base which demands an integrated polygonal sustainable development approach. The ongoing management approach is biased to only rice production through FCDI.   Thus this primitive mode of action is narrowing other resources base having more economic potential ever thought.

These resources are: grass, reeds, submerged plants, mollusks, fishes, turtles, birds and the swamp forests. Natural gas and peats are two dominant natural energy sources of haor ecosystem. Bio-fuels, Biomass, Bio-energy, Natural manure/compost out of huge aquatic vegetation are somehow ignored in the ongoing haor resource management approach. Eventually mollusk culture, cattle grazing, natural fattening of livestock, duck-rearing and winter horticulture might generate huge revenue and local employment.  In addition SME in aquatic resources sector could be a new arena of sustainable development for haor basin.  At the given climate change scenario “raised housing” and “monsoon pisciculture”  are two major options to combat the flash floods of haors, which need to be implemented.

Clearing of swamp forest, reedlands and indiscriminate hunting and poaching resulted in extinction of all most all mega fauna including Swamp Deer, Hog Deer,  Rhinoceros, and Marsh Crocodile, Rock Python, Black-necked Stork, Bengal Florican, Pink-headed Duck and so on from the haor basin. In addition a large numbers of valuable wetlands species of flora and fauna are on the verge of extinction. Fisheries resources have also been depleting at an alarming rate and more than a dozen of freshwater fish species are categorized as vulnerable and endangered. This implies that there is a crisis of visionary philosophy to the haor basin resource management. Now, as far as Ramsar convention is concerned, it is an urgent need to change the vision and act as per the modern concept of sustainable development vide the CBD/Ramsar/agenda-21/PRSP and MDGs goals and objectives of which Bangladesh is an active partner. Hence,  national wetlands policy is key demand to fulfill the national obligation for managing wetlands and its precious biological and  other renewable natural resources in a sustainable way.

Bangladesh is the largest delta in the world predominantly comprising large network of rives and wetlands. Wetlands in Bangladesh are represented by inland freshwater, estuarine brakishwater and tidal salt-water coastal wetlands. Bangladesh posses enormous area of wetlands including rivers and streams, freshwater lakes and marshes, haors, baors, beels, water storage reservoirs, fish ponds, flooded cultivated fields and estuarine systems with extensive mangrove swamps. The past, present, and future of Bangladesh, and its people’s livelihoods are intimately connected to its relationship with water and wetlands.  More than 90% of the country’s total area consists of alluvial plains, crisscrossed by a complex network of rivers and their tributaries.  Floodplains, beels (low-lying depressions in the floodplain), haors (deep depression) and baors (oxbow lakes) represent the inland freshwater wetlands.  The country’s wetland ecosystems also offer critical habitats for globally significant biological diversity. Of these the deeply flooded basins of north-east Bangladesh, known as haors, are a habitat of wide range of wild flora and fauna unique to Bangladesh.

The haor basin lies within the districts of Sylhet, Sunamgonj, Netrokona, Kishoregonj, Habigonj, Moulvibazar and Brahmanbaria in the Northeast region of Bangladesh comprises the floodplains of the Meghna tributaries  and is characterized by the presence of numerous large, deeply flooded depressions, known as haors.   It covers about around 8,568 km2 area of Bangladesh. The topography of the region is steep at around foothills in the north and slopes becoming mild and milder gradually at downstream towards south.

The haor basin is characterized by having diverse wetlands (beels, khals, rivers and vast seasonally flooded lands) and kanda’s (ridges along the edges of wetlands which usually remain fallow in the dry season). Presence of Swamp forests and reed lands in the haor basin constitute the rich aquatic environment. The aquatic products are used to provide various benefits to the people such as food, nutrition, income, fodder, fuel, thatching materials, medicine and varieties of other benefits. These are now under threat due to over use and lack of any sustainable management interventions.

The seriousness of the continuing loss of wetlands demands a new approach to wetland management. A major portion of the wetland area has been converted from its natural state to support alternative land uses including agriculture, culture fisheries, urbanization, industry, and other development pursuits. Wetlands have also been degraded by unsustainable land use practices that have resulted in vegetation destruction; nutrient and toxin loading, sedimentation, turbidity, and altered flow regimes. Intensive use of agrochemicals and water transport has also affected the natural balance of wetlands. To sustain the balanced economic growth, there is a dire need to manage the haor wetlands in a symmetrical manner so that the renewability of the natural resources could be maintained while sustaining social and economic benefits from the haor wetlands and biodiversity. Since the early 1990s the importance of wetlands in Bangladesh has started to be recognized. There is now a growing recognition in Bangladesh that remaining wetlands are important as demonstrated by changes in policy: the National Water Policy directs that there will be no further drainage of wetlands for agriculture, while filling of water bodies for urban and industrial development has become a contentious issue and subject to litigation on environmental grounds. Diverse species of plants, insects, amphibians, reptiles, birds, fishes, and mammals depend on wetlands for food, habitat, or temporary shelter. Environment and its allied national policies of Bangladesh have conceived that wetlands have archeological, historical, cultural, recreational, and scientific values. Societies have traditionally formed along bodies of water and artifacts found in wetlands provide information about these societies.