Govt. has evidences of BNP-Jamaat link with recent killings: PM 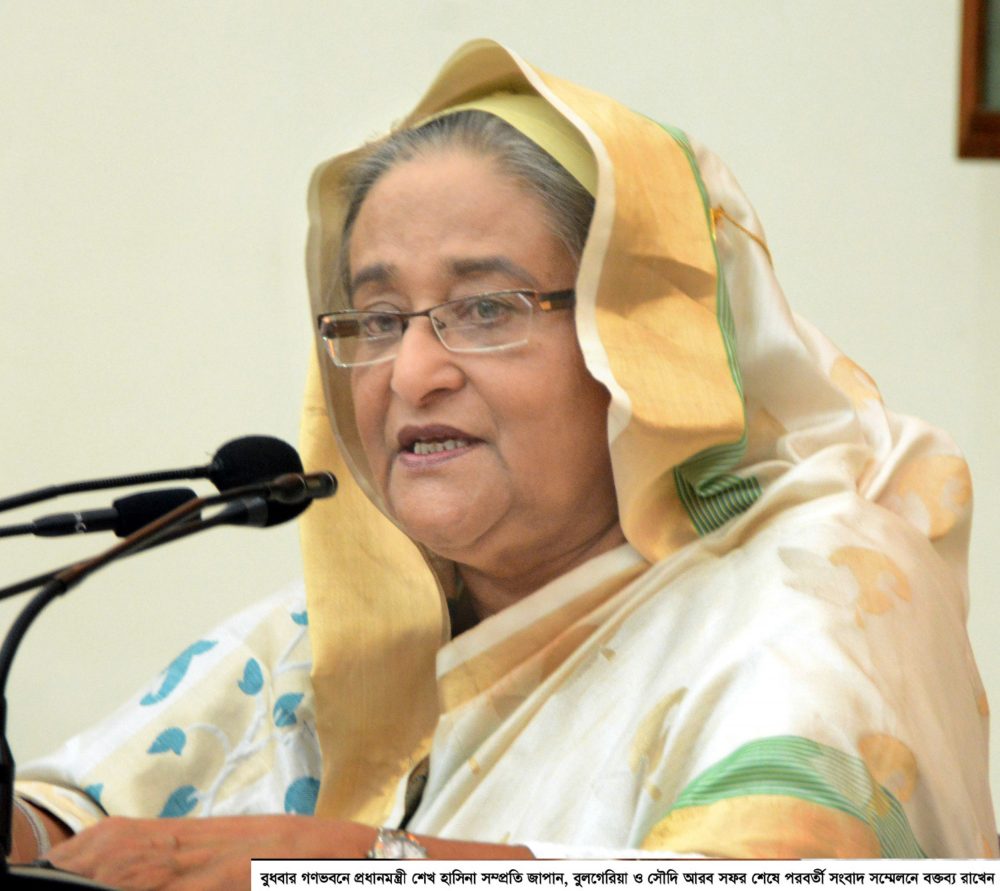 #thenewscompany – Prime Minister Sheikh Hasina today firmly said BNP and Jamaat activists have link with the recent secret killings that happened in the country over the last few months as the government has substantial evidences about the accused persons.

She ruled out the claim of a section of people that the statements so far given by the government accusing BNP and Jamaat for those killings are biased and politically motivated. Those people who want to protect the two parties and hide their evil acts, talk in this manner, she said.

The Prime Minister said this at a press conference held at her Gonobhaban residence here this afternoon to inform the media on her recent visit to three countries – Bulgaria, Japan and Saudi Arabia.

Apart from highlighting the country’s achievements from those visits, the Prime Minister responded to queries of journalists on recent socioeconomic and political situation, particularly target killings of innocent people.

Sheikh Hasina said, all clues, nature of killing and identity of the arrested persons substantiate that the killers have same link and root in BNP and Jamaat. If anybody knows about more militants and terrorists link with the heinous acts can disclose their names and address to the law enforcing agencies, she said.

Sheikh Hasina said the countrymen should not forget the fact that militants raised their heads in Bangladesh under patronization of BNP and Jamaat. Militants brought out procession under the police protection during their regime and the two parties gave protection to war criminals and Bangabandhu’s killers.

She said BNP Jamaat clique was linked with every incident from grenade attack on August 21, murder of Ahsaullah Master, SAMS Kibria and detonating bomb at Kotalipara. So what is the logic to be so complacent about their detachment with the current militant activities?’ she asked.

Pointing out the conspiracy of BNP to kill Sajeeb Wajed Joy in USA the Prime Minister said two renowned BNP intellectuals are connected with the plot and US bureau of intelligence has unearthed it. So what is wrong when we find their link with the secrete killings?’ she asked.

“As the head of the government I have the information about their linkage with the secret killings and we never say anything without fact,” she said adding that in the interest of investigation the government cannot disclose everything.

Those people who find no link of BNP and Jamaat with the secret killings, are out to save the militants, and encourage their activities,” the Prime Minister said.

About the association of Bangladesh with the Saudi initiative of forging a security alliance, the Prime Minister said the alliance was aimed at protecting the Muslim Ummah from militancy and terrorism. So-called Arab Spring in the Middle-Eastern countries now cannot blossom any flower but shed blood of Muslim Ummah, she said.

“Bangladesh has joined that alliance led by Saudi Arabia as we believe in principle that the decision of formation of the group is a historic decision,” Sheikh Hasina said. So far, 40 countries have been associated with the alliance and expressed their solidarity with the efforts against the militancy and terrorism.

“So, I have also assured the Saudi King of Bangladesh’s steadfast stance to cooperate with any initiative against terrorism and militancy and extend all support including military one to ensure protection of the two holy mosques of the Muslims,” the prime minister said adding that through joining the alliance, Bangladesh has proved its ability to take cooperative stand with any country.

Sheikh Hasina reiterated that Islam is a religion of peace, where there is place for terrorism. None can deliver judgment about the activities of fellow human beings as the almighty Allah is the last adjudicator. Those people who kill people in the name of religion have no faith in Islam, she said.

“Everybody will bear his/her own sin. But in the name of protecting Islam a small section of people are engaged in homicide, which is ultimately tarnishing the image of Islam,” she said urging the true believers, preachers of religions and guardians to infuse real religious spirit in everybody and look into the matter whether any of their family members are becoming radicalized.

Sheikh Hasina urged everybody to make people aware against the militants and sought their help to find out the culprits involved in clandestine murders and smash their hideouts.

Prime Minister Sheikh Hasina said world leaders in G-7 Outreach Meeting as well as the leaders of all three countries she visited, praised Bangladesh’s unequivocal role against terrorism and militancy. But, some of our people misguide their ambassadors in Dhaka to explain the situation differently.

“Even the journalists sometimes write everything out of their good sense; she said adding that everybody has a responsibility to project the country positively to get due honour and dignity amidst world comity.

Responding to a question on the violence in the recently concluded Union Parishad election the Prime Minister differed with the report of a section of newspaper that it was the most violent polls in the country’s history.

Recalling the voter-less election during BNP and Ershad regime she said some sporadic electoral violence took place across the country, but it was under control. Now all powers have been bestowed on the Election Commission. The government didn’t prevent the EC to lodge FIR against an Awami League legislator, she said.

Sheikh Hasina sad most of the electoral violence took place due to conflict among the member candidates while rival candidates of Awami League was linked with some incidents. “But we have also information that a good number of election officials who were appointed during the BNP regime are responsible for many troubles,” she said

Disagreeing with the notion that election on party basis caused the violence, the Prime Minister said, the election with party symbol has created scope to practice democracy at grassroots level. Partisan election will make the Union Parishads more accountable, she said.

Saying that any form of violence is unacceptable, the Prime Minister said, the government doesn’t want any hostility in UP polls. There might have many errors as it was the first time election on party basis, she said adding that adequate measures would be taken to check poll violence in future.

Replying to a question about any possibility of severing or limiting the diplomatic relation with Pakistan for its stand in favour of war criminals, the prime minister said her government doesn’t believe in complete cutting of relation with any country.

“Diplomatic relation with Pakistan will exist though we don’t accept their comment,” she said.

“Let Pakistan say what it prefers,” she said adding from their statement it’s evident that we have rightly identified the elements against our independence. Their statement also made it clear that the war criminals acted as the agents of Pakistan and involved with the genocide with Pakistani Army.

“Now those people who still have some sympathy for Pakistan may reconsider their affection for that country,” the Prime Minister noted.

Armed Shibir cadre arrested after “gunfight” with police in Ctg