Google Offers New YouTube Interface For You To Try 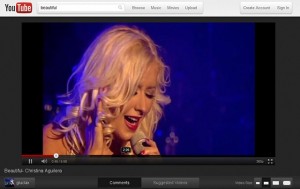 After rolling out Google+ and sneak previewing a revamped Gmail interface, now Google has redesigned YouTube with new features that are more than skin deep.

Announced on Thursday on the YouTube Blog, the new Youtube interface is an experiment that Google is calling “Cosmic Panda,” and unlike Google+, this one’s open to everyone.

Gone is that white background underneath the video player, replaced by a less-distracting dark gray backdrop. At the bottom of that frame are four new icons that let you conveniently change the video frame size. There are new page designs and improved editing tools to customize channels. Best of all, when you’re using Google Chrome, you can keep one video playing while you’re looking for others, switching between channels or playlists.

Another improvement is the ability to choose whether you see comments or not, with buttons allowing you to dismiss comments and fill the page below the video player with suggested videos that are each end larger frames. In addition, Cosmic Panda makes it easier to edit a channel template, giving users a choice of layouts for creators, bloggers, networks and a general-use template Google calls “everything.”

Unfortunately, Google’s YouTube player has retained the old transport controls from the previous YouTube interface, and there’s no icon to click to incrementally skip forward or backward. You can still do that with the slider control underneath the video, but as you can see in our gallery of screenshots below, on this new version, the zone where you can click to skip forward or backward is even smaller than that area on the old version.

Even with those quibbles, I think the new YouTube interface is a significant improvement over the current one. What do you think? Go ahead, try it yourself at Google’s Cosmic Panda page. And don’t worry — if you don’t like it, you can easily change back to the old YouTube interface.