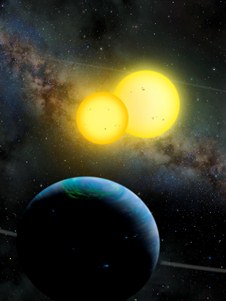 While long anticipated in both science and science fiction, the existence of a circumbinary planet — a planet orbiting two stars — like “Tatooine” portrayed in the film Star Wars more than 30 years ago, was not definitively established until the discovery of Kepler-16b, announced in September 2011.

“This work further establishes that such ‘two sun’ planets are not rare exceptions, but may in fact be common, with many millions existing in our galaxy,” said William Welsh of San Diego State University and Kepler participating scientist who led the study. “This discovery broadens the hunting ground for systems that could support life.”

The Kepler space telescope detects planets and planet candidates by measuring dips in the brightness of more than 150,000 stars to search for planets crossing in front, or transiting, their stars. The Kepler science team requires at least three transits to verify a signal as a planet.

The two new planets, named Kepler-34b and Kepler-35b, are both gaseous Saturn-size planets. Kepler-34b orbits its two sun-like stars every 289 days, and the stars orbit one another every 28 days. Kepler-35b orbits its smaller and cooler host stars every 131 days, and the stellar pair orbit each other every 21 days. The planets reside too close to their parent stars to be in the “habitable zone”- the region where liquid water could exist on a planet’s surface.

At 4,900 and 5,400 light-years from Earth, located in the constellation Cygnus, Kepler-34b and Kepler-35b are among the most distant planets discovered. The findings are described in a new study published Wednesday, Jan. 11, 2012 in the journal Nature.

Google: Sees All, Knows All, Sells All