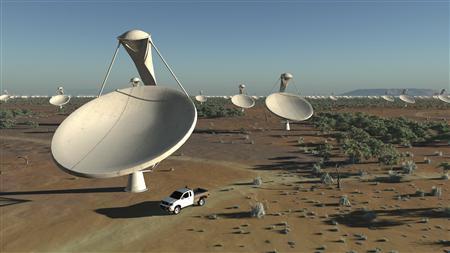 The world’s biggest and most advanced radio telescope, capable of detecting signs of extraterrestrial life in the far reaches of the universe, will be located in South Africa, Australia and New Zealand.

The decision to split the location of the $2 billion “Square Kilometre Array” followed intense lobbying by the two leading bidders, South Africa one side and a joint bid from Australia and New Zealand on the other.

Scientists leading the project rejected the suggestion that the decision, which will mean higher costs, meant science had taken a back seat to political expediency.

“I can’t deny there is a political aspect to the process because when you are spending very large amounts of public money, politicians are going to be interested,” said John Womersley, Chair of the Board of Directors of the SKA organisation.

“However the decision we took is scientifically motivated, which in no way compromises the scientific capabilities,” he said on Friday.

There is already infrastructure in South Africa and Australia, including radio telescope dishes that were built as precursors to the new array. They will now be incorporated into the SKA.

The consortium estimates that the decision to split the project will add about 10 percent to the 350 million euro ($440 million) budget for the first phase of construction.

When completed in 2024 the telescope will be made up of 3,000 dishes, each 15 meters (50 feet) wide, together with many more antennae, that together will give a receiver surface area of a square kilometer.

Scanning the sky 10,000 times faster and with 50 times the sensitivity of any other telescope, it will be able to see 10 times further into the universe and detect signals that are 10 times older.

It will be used to study the origins of the universe and will be able to detect very weak signals that could indicate the presence of extraterrestrial life.

“This hugely important step for the project allows us to progress the design and prepare for the construction phase of the telescope,” said Michiel van Haarlem, Director General of the consortium.

“The SKA will transform our view of the universe; with it we will see back to the moments after the Big Bang and discover previously unexplored parts of the cosmos.”

Womersley said the telescope will help scientists understand what the universe is made of “because one of the most surprising discoveries of the past decade has been that 95 to 96 percent of the universe is not made of atoms, not made of stuff in the periodic table, but made of things we don’t understand at all, dark matter, and dark energy.”

The SKA is more than just a scientific bauble. Global tech companies are already earmarking development funds linked to the project, which will rely on computing technology that does not even exist yet to process the flood of data it will collect. Scientists estimate that the SKA will need processing power equivalent to several million of today’s fastest computers.

“If you take the current global daily Internet traffic and multiply it by two, you are in the range of the data set that the Square Kilometre Array radio telescope will be collecting every day,” said IBM Researcher Ton Engbersen at the announcement of the deal.

Other companies that have signed partnership agreements with the project include Nokia-Siemens, BAE Systems PLC, Cisco Systems Inc and Selex Galileo, a UK unit of Italian group Finmeccanica SpA.

The engineering and computing challenges are significant, not least the provision of power to run the array and the supercomputers in remote locations away from the radio interference of towns and cities.

It is overcoming those challenges that the leaders of the project argue could lead to untold spin-offs for industry. They point to Wi-Fi technology as one of the best known commercial applications to come from radio astronomy, for instance.

The first phase of construction is set to start in 2016 completion is penciled in for 2023.

Bernie Fanaroff, South African project director for the SKA, said the telescope could have a real impact on social and economic development for the country and its neighbors.

“A project like this is iconic; it’s inspirational, and it raises the profile of science and technology in Africa dramatically, both in the eyes of the rest of the world and in the eyes of Africans.”

He added: “Africa was perceived as not too high tech. People talked about Africa as the next big business destination, the next great economic growth story, but you’ve got to underpin that with something, you don’t want to just dig things out of the ground and ship them off to Asia or Europe.”

South Africa’s Science Minister welcomed the compromise. “It was an unexpected decision,” said Naledi Pandor. “We accept the comprise in the interests of progress.”

“Sharing the project means researchers will get the best possible results by capitalizing on the respective infrastructure and strengths of both sites.”

Evans said the remote site for the Australian arm of the project – the Murchison shire some 350km (200 miles) northeast of Geraldton in Western Australia – was “the perfect combination of Australian outback and high science”.

The decision was announced at a meeting of the international consortium controlling the project, at Schipol Airport in the Netherlands.