Facebook Wants You to Star Your Friends in Push for Lists 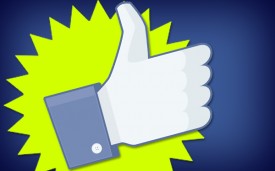 Facebook is testing a new feature called Close Friends, which lets you know every action the people you add to the list take on the social network. Facebook told Mashable it began the push to some users Thursday.

When you sign into Facebook, you’ll be prompted to “Star Your Close Friends” to guarantee you don’t miss their important moments. In other words, you can now stay close to people you indicate as high-priority friends without ever interacting, visiting their profile or catching an update in your news feed.

Facebook’s explanation of the new features emphasizes organizing your friends into Smart Lists, based on where you work, live, went to school or family, to ensure you share with just the right people.

You can also view a news feed of your Close Friends update — much like a feed of a certain Google+ circle — by selecting the list from below the Friends tab on the left-hand side.

I decided to try out the new feature Friday morning, by adding about 20 friends to my Close Friends list. I added stars — Facebook conveniently suggests a pretty good idea of who you consider your close friends based on your interactions — and was ensured my friends wouldn’t know they’d been added to my list. Within an hour, I’d received a handful of notifications — only none of them had anything to do with me. My friends had joined events, shared stories and posted to their Timelines and I didn’t miss a beat.

I was eager to test out the feature because it seemed like an easier way to create lists — something I’ve been meaning to do on Facebook since Google+ rolled out its Circles feature. But the Close Friends feature became annoying as soon as my phone was flooded with status updates that looked like this one.

If you receive mobile notifications from Facebook, it will send you an update every time someone you add to the list takes an action. If you’ve never restricted your push notifications on mobile before, this feature might be the one to drive you to cut some of them.

Do you organize your Facebook friends into lists? If so, do you only share certain posts with certain people?