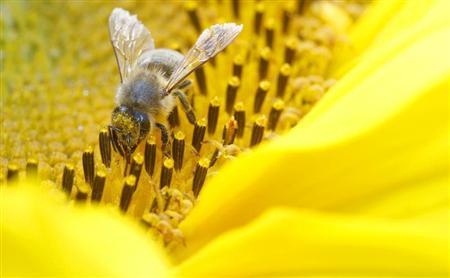 Bee collects nectar from a sunflower on a field.

EU governments failed to agree a ban on three widely used pesticides linked to the decline of honeybees on Friday, but the European Commission could force one through by the summer unless member states agree a compromise.

A sharp fall in bee populations around the world, partly due to a phenomenon known as colony collapse disorder, has fuelled concerns over the impact of widespread use of pesticides, notably the neonicotinoids class.

Syngeta and Bayer, leading global producers of neonicotinoids, say the harmful effects on bees is unproven and that a ban would cost the EU economy billions.

But campaign groups and some scientists accuse governments of caving into pressure from the agribusiness lobby.

Under EU rules, member states now have two months to reach a compromise or the Commission will be free to adopt the proposal.

“Forcing through the ban is one of the options available to us but first we need to reflect politically on the best way to proceed,” said EU health spokesman Frederic Vincent.

The Commission, which could also try to get a majority for a compromise proposal, put forward the restrictions in January after the EU’s food safety watchdog EFSA said neonicotinoids posed an acute risk to honeybee health.

However, the survey found no link between use of the pesticides and the specific problem of colony collapse.

Bees and other insects are crucial in pollinating most crops in Europe but neonicotinoids are used on more than 8 million hectares to boost yields of rapeseed, wheat and other staples.

The proposal would ban neonicotinoids on all crops except winter cereals and plants not attractive to bees, such as sugar beet. It would apply from July 1, 2013, ensuring this spring’s maize sowing is unaffected, with a review after two years.

Sources close to the discussions said 13 EU governments favored a ban and nine voted against. Britain, Germany and three other states abstained.

“Restricting the use of this vital crop protection technology will do nothing to help improve bee health,” his statement added.

While few deny that neonicotinoids can be harmful to bees, there are conflicting scientific opinions on the actual threat they pose under normal growing conditions.

“Of course they can kill bees, they are insecticides; but whether they actually do this, or whether sub-lethal effects occur and damage the colonies on any important scale, has not been proven,” said Lin Field, head of biological chemistry at Britain’s Rothamsted Research centre.

Some point to habitat decline and disease-carrying parasites such as the Varroa mite as the chief cause of bee deaths.

But David Goulson, professor of biological sciences at the University of Stirling in Scotland, said there was clear evidence feeding on treated crops was likely to cause bees significant harm.

“Yet politicians choose to ignore all of this. Presumably their opinions were swayed by the spurious claims that restricting use of these insecticides will cause vast economic losses to farming,” he said.

A Syngenta and Bayer funded study showed a blanket ban on treating seeds with neonicotinoids would cut EU net wheat exports by 16 percent and lead to a 57 percent rise in maize imports, costing the EU economy 4.5 billion euros per year.

Separately, researchers have put the financial contribution of insect pollinators to the EU farming sector at 22 billion euros ($28.5 billion) a year, and 153 billion euros globally.

Campaign group Avaaz, which has collected more than 2.5 million signatures on a petition for the European Union to ban the products, accused governments of ignoring public opinion.

“Today, Germany and Britain have caved in to the industry lobby and refused to ban bee-killing pesticides,” Avaaz campaigner Iain Keith said in a statement.