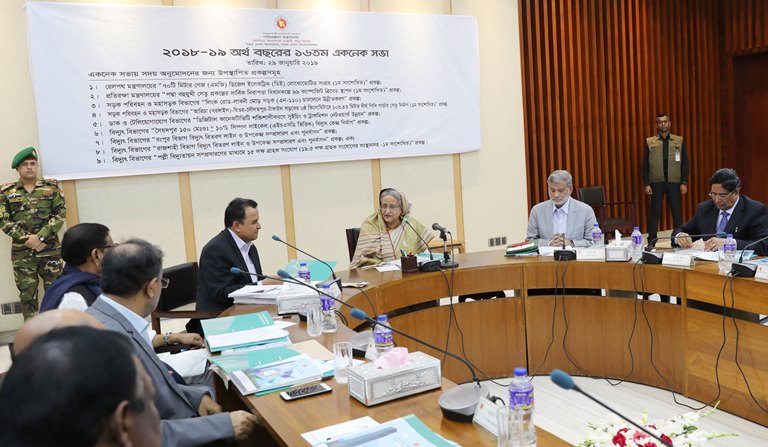 Briefing the reporters after the meeting, Planning Minister MA Mannan said
that a total of nine projects were approved today involving an overall
estimated cost of Taka 16,433.27 crore.

Of the approved nine projects, five schemes are new while four others are
revised ones.

The planning minister said Prime Minister Sheikh Hasina in the meeting
asked the Ministry of Land to frame a national policy for optimum utilization
of land for various purposes like building industries and agricultural uses
across the country.

The prime minister asked the Ministry of Land to come up with a detailed
plan in this regard, he added.

The premier asked the Ministry of Railways to frame a plan to transform all
the existing meter gauge railway tracks in the country into broad gauge in
future.

She underscored the need for strengthening the capacity of Bangladesh
Railway through ensuring BMRE of the existing workshops so that these could
continue maintenance works extensively and manufacture Railway spare parts
instead of importing those from abroad.

The prime minister also stressed the need for developing an integrated
communication system across the country comprising the roads, railways and
waterways.

She also reiterated her stance to incorporate Effluent Treatment Plants
(ETPs) in every future development projects where infrastructure works are
associated for ensuring waste management.
Mannan said the ECNEC meeting praised highly the PDB and the REB for their
works over the years to widen the coverage of electricity across the country.

The Planning Minister said both the power distribution line projects aim
at ensuring cent percent electrification by 2021 in the project areas,
strengthening and improving further the power distribution system to provide
uninterrupted power supply for every user by 2030, improving the socio-
economic conditions of people in the project areas and providing improved
client services.

The Rangpur division power distributions line and substations extension
and rehabilitation project will be implemented by the Northern Electric
Supply Company (NESCO) Limited under the Power Division with an estimated
cost of Taka 1,123.85 crore. The project is scheduled to be implemented by
June, 2022.

The project will be implemented at 21 city corporation, pourasabha and
upazila areas under eight districts of Rangpur division. The project will
also increase the capacity by 220 MVA and some 1.80 lakh new power
connections will be provided.

The main project operations include erection of some 3,192 kilometer new
power connections, renovation of the existing 1,739 kilometer old lines,
standard up-gradation and rehabilitation of some 10 33/11 KV sub-stations,
installation of 4,326 distribution transformers and some 368 11KV capacitor
banks.

The Rajshahi Division distribution line and substation extension and
rehabilitation project will be implemented also by the Northern Electricity
Supply Company (NESCO) Limited under the Power Division with an estimated
cost of Taka 1,091.32 crore. The project is scheduled to be completed by
June, 2022.

This project will also increase the capacity by 470 MVA and some 2.35 lakh
new power connections will be provided.

The day’s ECNEC meeting also approved another project for establishing
Sayedpur 150 MW+ 10% simple cycle (HSD based) power station with an estimated
cost of Taka 1,001 crore. Power Division will implement the project by June,
2021.

This project aims to enhance the power production capacity to meet the
growing demand of power in the northern region and thus create regional
balance in power production.