Roger Waters is the most famous rock star to have publicly supported the campaign for boycott, divestment and sanctions (BDS) against Israel. 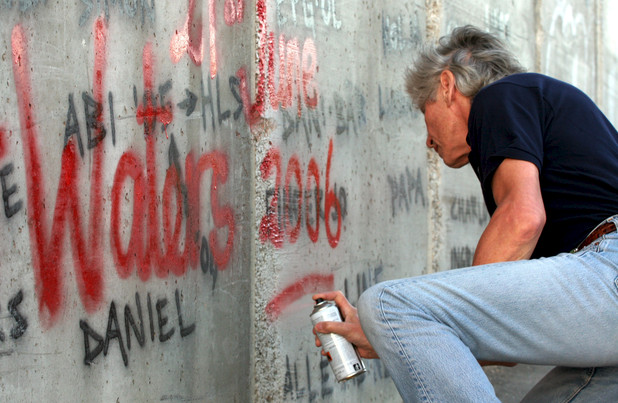 A founder of Pink Floyd — a British rock group which has sold more than 250 million albums — Waters decided to become active in the international Palestinian solidarity movement following a trip to the West Bank in 2006. Shocked by the oppression that he witnessed, Waters spray-painted the words “we don’t need no thought control” — a line from one of his biggest hits — on Israel’s wall.

More recently, Waters has served as a juror on the Russell Tribunal on Palestine, an initiative aimed at drawing attention to how Western governments and companies aid Israel’s violations of international law. In that capacity, he addressed the United Nations during November last year.

Visiting Brussels for the tribunal’s final session, Waters said he would explore the idea of releasing a single urging musicians not to perform in Israel. He intends to discuss this project with Steven Van Zandt, the guitarist in Bruce Springsteen’s E Street Band, who assembled many well-known musicians to record Sun City, a protest song against apartheid in South Africa during the 1980s.

David Cronin: Do you think the campaign for a cultural boycott of Israel is having an impact?

Roger Waters: I’d like to think that it was.

My experience when I speak to people to and say “don’t go” is either they reply “that sounds good” or they say “don’t you think it’s better to go there?”

I think that the kind of boycott that was implemented against the apartheid regime in South Africa back in the day is probably the most effective way to go because the situation is that the Israeli government runs an apartheid regime in Israel, the occupied territories and everywhere else it decides. Let us not forget that they laid waste to most of Lebanon around the time I started getting involved in this issue. They destroyed airports, hospitals, any public buildings they could.

They are running riot and it seems unlikely that running over there and playing the violin will have any lasting effect.

DC: Have you personally asked any fellow musicians to boycott Israel?

DC: Would you prepared to say who those musicians were?

RW: No, I wouldn’t be. It was entirely private between me and them.

All I would say is that part of my involvement here in the Russell Tribunal today and tomorrow is that I am about to publish an open letter written to all my colleagues in the music industry, asking them to join me in the BDS movement. This is not just to colleagues in the UK or US but around the world.

What caused me to write this public letter was an affair where Stevie Wonder was hired to play a gala dinner for the Israeli Defense Forces on 6 December last year. I wrote a letter to him saying that this would be like playing a police ball in Johannesburg the day after the Sharpeville massacre in 1960. It wouldn’t be a great thing to do, particularly as he was meant to be a UN ambassador for peace. It wasn’t just me. Desmond Tutu also wrote a letter.

To his eternal credit, Stevie Wonder called them [the gala’s organizers] up and said “I didn’t quite get it” [and canceled the performance]. This happened one week after I made a speech to the UN. Neither of these events were reported anywhere in the mainstream media in the United States of America.

Both events were almost as important as [TV personality] Kim Kardashian’s bra size. The way they are not being reported means the media must be under instructions from somewhere not to report these things to the American public, on what grounds I cannot guess.

DC: How do you feel about the support for Israel offered by David Cameron’s government in your native Britain?

RW: Cameron has absolutely adopted Tony Blair’s wolf’s clothing that he [Blair] adopted so eagerly and happily when he went to war in Iraq on George Bush’s coat-tails.

Cameron is entirely content for Great Britain to be a satellite nation of the US. None of us can quite understand why.

There is a glimmer of light at the end of the tunnel. The EU’s diplomatic emissaries [in the West Bank] joined together [recently]. They protested the settlements and asked for sanctions. This is almost unprecedented. But the governments of these emissaries have done nothing and continue to do nothing.

I have been very disillusioned with UK foreign policy really since [Harold] Wilson [a Labor Party prime minister during the 1960s and 1970s]. It was such a political turnabout from [Labor leaders] Keir Hardie and [Clement] Attlee and the principles of British socialism. It was a precursor for taking over the country with the appalling monetarist strategies of Margaret Thatcher and Ronald Reagan. I’m quite ashamed of the way we have behaved. The UK has been royally fucking the world over for centuries — not least you bog Irish.

DC: One of your fellow jurors on the Russell Tribunal, Stéphane Hessel, died recently. Did you know him well?

RW: I knew him very little. What a brave, eloquent, good-hearted, brilliant man.

DC: As a musician, have you had a chance to check out the vibrant Palestinian hip-hop scene?

RW: I haven’t. But if it thrives, I can’t find anything negative about that, so long as it’s not about bling and booty and wearing a baseball cap sideways. So long as it’s about protest and realism, rather than the flight from realism that hip-hop is in the US.

DC: In your speech to the UN, you paid tribute to Rachel Corrie. Is there anything you would like to say about Rachel Corrie, given that it’s the tenth anniversary of her murder?

DC: Do you support the hunger strikes being undertaken by a number of Palestinian prisoners?

RW: The thing about political prisoners is: it doesn’t matter if you are in the Maze [in Northern Ireland] or in a prison somewhere in Israel, your options are very limited. Hunger strikes or dirty protests are some of the very few options to bring attention to your specific predicament.

I respect the brave men and women who go to those lengths. As we know, hunger-striking is not like going on a diet. It is real, dangerous and painful. You don’t do it without compelling reasons.

Mobiles 'could kill off textbooks'