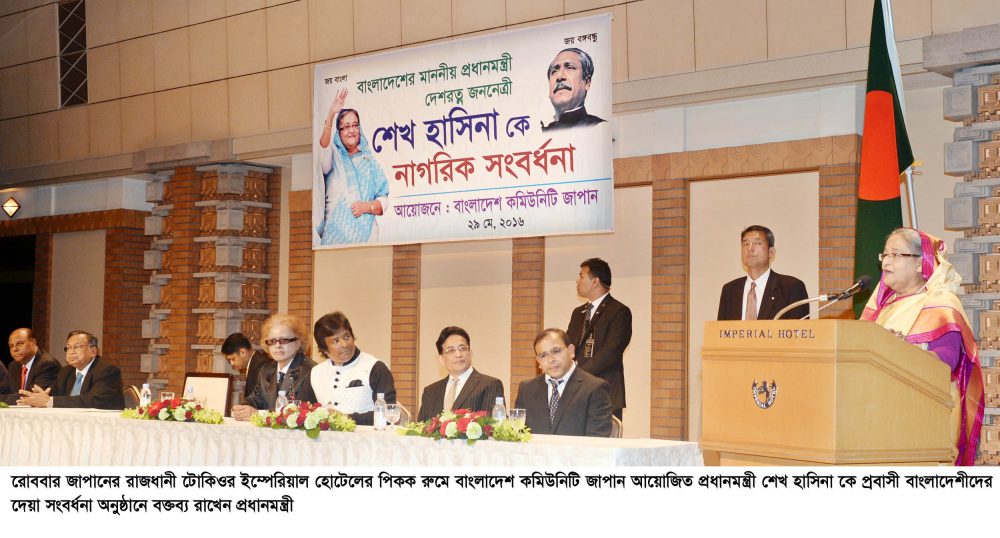 #thenewscompany- Prime Minister Sheikh Hasina here today reiterated that the BNP-Jamaat nexus was committing targeted secret killings to create instability in the country. “Being failed to oust the government through killing people and destroying public and private property in the name of movement, the BNP-Jamaat has launched clandestine killings to destabilize the country’s progress and development,” she said.

Earlier different units of Awami League and its associate organizations greeted the Premier presenting bouquets of flowers. Sheikh Hasina said the BNP-Jamaat clique was now selectively killing imams of mosques, priests of temples, fathers of churches and teachers of universities alongside common people to create instability in the country.

“Their another aim is to stop the trial of war criminals and foil the verdicts of the court,” she said, Referring to recent brutal double murder of Xhulhaz Mannan, a USAID official, and his one of his friends in Kalabagan in Dhaka, she said the aim of the killers was to harm the bilateral relations between Bangladesh and the USA. Recalling the mindless atrocities and rampage unleashed by the BNP-Jamaat evil force before and after the January 5 polls and in the first three months of 2015, the Prime Minister said when the country was marching forward towards development, the BNP-Jamaat started the politics of destruction.

She said it seemed to the people that a grand festival of burning the people to death was launched by the BNP-Jamaat nexus.”What was her (Khaleda’s) movement? … only burning people to deaths like a grand galore of burning people…this was also their (BNP-Jamaat’s) movement only to destroy state property,” Sheikh Hasina said, adding they committed this destructive acts as war criminals were with them.

She said the BNP leader had announced that she won’t return home until the fall of the government. But Begum Zia had to compel to surrender before the court and back home by rubbing her nose on the ground, the PM said. Vowing to continue the trial of war criminals, Sheikh Hasina said the trial of 1971 culprits was the expectation of the nation and through it the people of the country are being freed from long 45-year stigma . Pointing out that the world community now treat Bangladesh with dignity and honour, the Prime Minister said that each and every expatriate Bangladeshi are the ambassador of the country and they have significant role in this regard.

She also urged them to work with sincerity so that Bangladesh could not be undermined with bad reputation and requested them not to be disappointed. The Prime Minister mentioned that Japan had always extended its hand of support to the Bangladesh’s overall development efforts. She also said that the inward remittances by the expatriate Bangladeshis are contributing a lot to the socio-economic development of the country. “We always remember the contributions of expatriate Bangladeshis towards the country’s development,” she said.

Referring to construction of the proposed Bangabandhu International Airport in the country, Sheikh Hasina sought the Japanese government’s support in this regard. Besides, she said, 500 acres of land will be allotted for Japanese investors near Dhaka wherever they like to invest and establish industries there. She also pointed out her government’s initiative to construct Paira seaport in southern region of the country and said the work of the port is progressing. The Prime Minister also noted her government’s steps of establishing 100 special economic zones across the country to attract more foreign investment.

In this regard, she mentioned that the government will set up the special economic zones in particular areas considering availability of raw materials of the concerned localities. About the January 5 polls, Sheikh Hasina said that the countrymen bestowed the responsibility of running the country upon her party despite vehement opposition from the BNP-Jamaat clique. In this context, she said that she is ready to make any sacrifice to accomplish responsibilities and sought Doa of the countrymen in this regard.

Citing the success of her government in winning maritime boundary cases with India and Myanmar, the Prime Minister sought cooperation of Japan in extracting resources from the huge sea areas as well as more foreign investment to this end. Sheikh Hasina also elaborated achievements of her government in the last seven and half years in various sectors including agriculture, education, health, communication, poverty reduction, energy and power and the ICT.