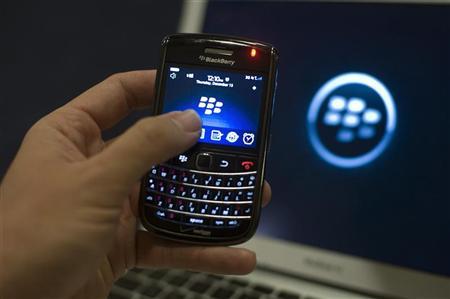 Research In Motion may still see software licensing as an important part of its turnaround plan, even though Samsung has denied that it might pay to use the BlackBerry maker’s technology or even buy the company.

RIM has likely held talks with several handset makers about using its new QNX platform, said a prominent RIM shareholder, who said he was briefed by the company. The operating system, already used in the PlayBook tablet, will power RIM’s next-generation smartphones due out later this year.

The shareholder, who declined to be identified because he was unauthorized to speak on the record, said he also believes Samsung is interested in a licensing deal despite its statements to the contrary.

“I’m secure they’re talking about licensing stuff,” the shareholder said, referring to the South Korean smartphone maker. “I don’t know if they’re looking to buy the company and I don’t care.”

RIM’s existing product lineup has struggled to compete with Apple’s iPhone and iPad and the slew of large-screen and powerful devices from Samsung and other manufacturers using Google’s Android operating system.

It also faces a resurgent Microsoft, which has built mobile software that powers Nokia’s newest devices, among others.

The Canadian smartphone company has haemorrhaged U.S. market share after a year marked by product delays and a botched launch of its PlayBook tablet. That has led to a 75 percent drop in market valuation and incessant talk about a sale of the company.

RIM’s shares have jumped nearly 40 percent since a Reuters report in December cited sources saying RIM had rebuffed takeover overtures from Amazon.com and others because it prefers to fix its problems on its own.

Two of those sources said at the time that RIM could strike technology licensing deals to boost revenue.

During RIM’s earnings conference call five days earlier, founder and co-chief executive Mike Lazaridis and his salesman cohort Jim Balsillie promised that RIM would look at all strategic alternatives as it seeks a turnaround.

“We are leaving no stone unturned,” Balsillie said. “We ask for your patience and confidence,” Lazaridis added.

The prospect of RIM shopping its QNX-based BlackBerry 10 software to rivals or even opening up its unique network for their use has excited some investors and analysts more than the less likely scenario of an outright sale.

“If Samsung or any other Android partner were to integrate RIM’s enterprise services like Blackberry Messenger into their offering, they would achieve instant differentiation in the increasingly monochrome Android space,” Frost and Sullivan analyst Craig Cartier said.

Such a deal would presumably give RIM’s stock a lift and ease some of the intense pressure on the company’s co-chiefs for drastic change.

“The ideal scenario for them would be to find something which unlocked additional value which could appease shareholders while they continue to run the business themselves,” Atlantic Equities analyst James Cordwell said in an interview.

Still, he expressed doubt that rival handset makers would rush to snap up a licensing agreement with RIM given most are well served by Android, Microsoft has created a viable alternative, and RIM has failed to deliver in the past.

“Ultimately it’s not proven in the market and they’ve got a pretty patchy track record in terms of actually delivering these things on time and then being as good as they say they’re going to be,” he said.

The Playbook, RIM’s first experiment with the QNX software, was panned when launched last spring because important features were missing from the tablet. Since then sales have been poor. RIM recently delayed its first QNX-equipped BlackBerry phones until late 2012.

Even so, Taiwan’s HTC and others might consider licensing QNX because of the cost associated with using Google’s free software, after Microsoft unleashed a storm of litigation and eked out royalty agreements on many of those using Android.

As Scotia Capital’s Gus Papageorgiou points out, RIM could offer QNX at a lower price or even for free and then charge via network operators once these new customers sign up for the popular BlackBerry Messaging service or RIM’s famous enterprise-grade security and compression.

But that plan would have its drawbacks.

“If RIM were to license out QNX and allow all devices to tap into BlackBerry services, it could drastically impede the competitive advantage of its existing devices,” Papageorgiou said, suggesting it may then have to offload the handset unit.

As always, much depends on how the two men most responsible for both the roaring success of the Blackberry and its more recent stumbles envision RIM’s future.

Lazaridis and Balsillie, who own each 5 percent of the company, have taken on a more humble tone in recent quarters but have shown no outward signs that they’re ready to quit.

Yet if tech precedent plays out, time may be in short supply for any seismic shift at RIM.

“As you’ve seen with the likes of Nokia and Palm, when things go wrong they can unwind very quickly,” Atlantic’s Cordwell said.