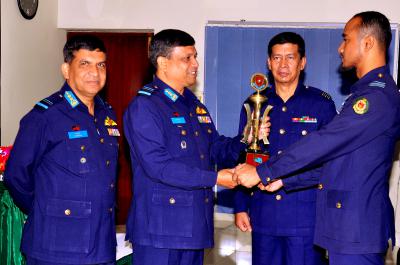 e-News® | The NEWS Company…DHAKA, Oct 30, 2015 : The certificate award giving ceremony of No.99 Junior Command and Staff Course of Bangladesh Air Force (BAF) was held at BAF Command and Staff Training Institute (CSTI) at its Base Bashar on Thursday.

Squadron Leader Md Hamidul Haque of BAF was awarded with the “Chief of Air Staff’s Trophy” for his best performance in the course. Masihuzzaman Serniabat thanked the government of participating countries for sending student officers in the course and hoped that they would continue to send their officers in future as well. Earlier, in the welcome address, the Officer Commanding of the institute, Wing Commander AHM Ameerul Ahsan gave a brief resume on the course curriculum.

Lulz, Security, Justice and the FBI