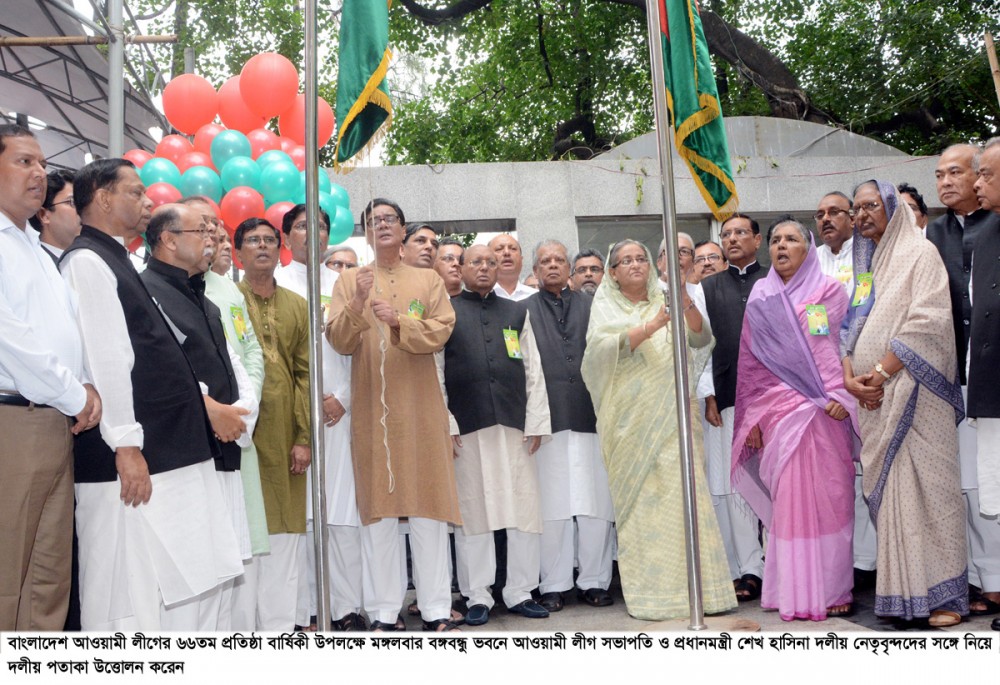 e-News® | The PRESS…DHAKA, June 23, 2015 : The 66th founding anniversary of the ruling Awami League was observed with an elaborate programme amid enthusiasm in the city and across the country today.

The programmes of the day included hoisting of the national and party flags atop Awami League offices across the country at dawn, placing of wreaths at the portrait of Father of the Nation Bangabandhu Sheikh Mujibur Rahman, bringing out joy marches in the morning and holding of discussions in the afternoon. On this day in 1949, the country’s largest and prestigious political party Awami Muslim League (East Pakistan Awami Muslim League) was floated at a two-day workers conference at historic Rose Garden at Abhoy Das Lane in the Old part of the City.

At the conference , Moulana Abdul Hamid Khan Bhasani, Shamsul Huq and Sheikh Mujibur Rahman were unanimously elected as its president, general secretary and joint secretary respectively. Later, the word ‘Muslim’ was dropped and Awami League surfaced before the masses as a people-oriented democratic and secular political party.

Earlier in the morning, leaders and workers of Awami League and its associate bodies placed wreaths at the portrait of Father of the Nation Bangabandhu Sheikh Mujibur Rahman on the premises of Bangabandhu Memorial Museum at Dhanmondi Road-32 braving heavy rains. At about 9-30 in the morning, Awami League president and Prime Minister Sheikh Hasina along with party stalwarts placed wreath at the portrait of Bangabandhu there paying deep homage to the chief architect of independent and sovereign Bangladesh.

The Prime Minister stood there in solemn silence for sometime as a mark of respect to the indomitable leader of independence. Members of her cabinet, state ministers and party lawmakers were present at that time. Later, Sheikh Hasina as the president of Awami League paid glowing tributes to Bangabandhu by placing another wreath there.

Later, the Awami League president along with leaders and workers of her party formally inaugurated programmes of the 66th founding anniversary at the same venue hoisting the national and party flags to the tune of the national anthem and releasing white pigeons and balloons. After departure of Awami League president and Prime Minister from the venue, leaders-workers of associate bodies of Awami League, likeminded and other organisations placed wreaths at the portrait of Bangabandhu marking the day.

INTERGEO SMART CITY SOLUTIONS: laboratory solutions for the city of the future