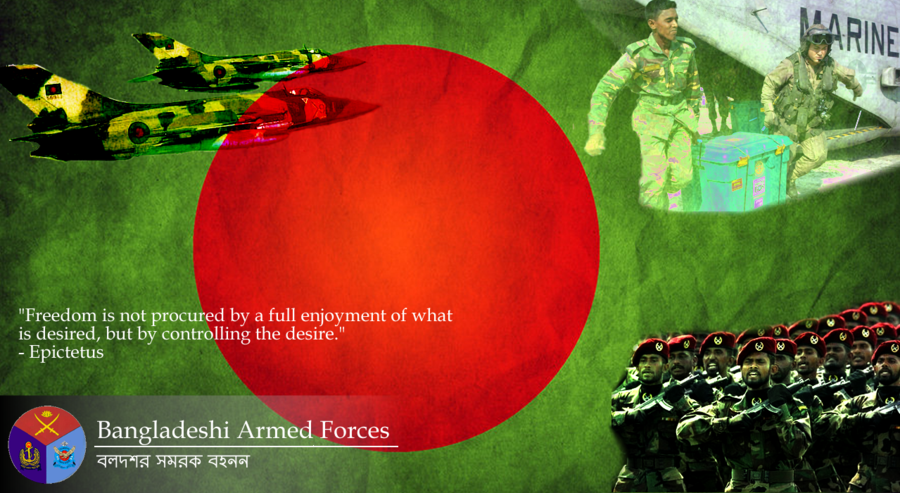 e-News® | The NEWS Company…DHAKA, Nov 20, 2014 – “Armed Forces’ Day” will be observed as usual on November 21, an ISPR press release said. Elaborate functions have been taken in all cantonments, naval and air bases of the country to celebrate the day. The day will begin with prayers in the morning seeking blessings for the development of the armed forces’ and the country. Later, president and prime minister will lay wreaths at the “Eternal Flame”. It will be followed by the chiefs of the three services.

A reception will be accorded to the family members of the Bir Shreshtoes and some selected decorated freedom fighters. Besides, those who have provided exceptional service in Peacekeeping in 2013-14 will also be honored with gallantry awards by the prime minister. In the afternoon, a civic reception will be hosted by the prime minister, who is also in charge of defense. Similar functions will be held in all military installations of the country.

All naval vessels at Dhaka (Sadarghat), Narayanganj, Chittagong, Khulna and Barisal will remain open for visitors between 2 pm and 4:30 pm on the day. Newspapers will publish special supplements on the day and Bangladesh Television will air a special program on “Specially Eternal” on November 20. Bangladesh Betar will broadcast a special program, “Specially Valiant” on November 21. Besides, essays, paintings and quiz competitions will be held in the educational institutions run by the armed forces.