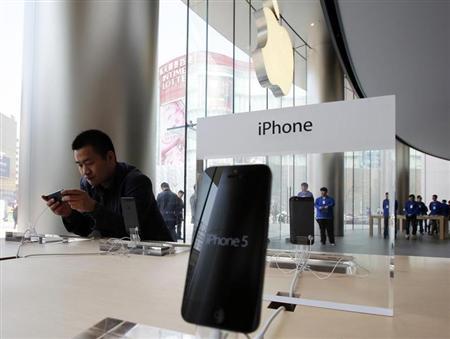 Apple Inc on Tuesday bowed to investors’ demands to share more of its $145 billion cash pile, while posting its first quarterly profit decline in more than a decade.

The new expanded capital plan includes issuing debt for the first time to fund $100 billion in share repurchases and higher dividends until the end of 2015. That doubles the amount from a program set up last year and makes Apple the largest dividend-paying company in the world.

The company’s shares, which last week closed below $400 for the first time since December 2011, rose briefly. But they retreated after Chief Executive Tim Cook told analysts on a conference call that “some really great stuff” was coming in the fall and 2014. That suggested Apple would have no new products in the market for the next few months.

Cook also acknowledged that Apple’s once stratospheric growth had tempered but stressed that the company’s position remained strong.

“Though we’ve achieved a credible scale and financial success, we acknowledge that our growth rate has slowed and our margins have decreased from the exceptionally high level we experienced in 2012,” he said, in an unusually frank admission of the company’s less upbeat circumstances.

In the last couple of years, demand for Apple’s iPhones and iPads has tended to ebb ahead of expected launches, which analysts said would hurt its profit for the current quarter.

Once considered a near sure-fire bet by Wall Street, worries about slowing growth and narrowing margins have made Apple’s shares among the worst performers this year.

Since hitting a record close of $702.10 last September, the world’s largest technology company has shed 44 percent, losing more than $280 billion of market value – or more than the entire market capitalization of Google Inc.

While Apple is still growing, its pace of growth has slowed as high-end smartphone adoption approaches saturation in the developed world and it goes head-to-head with increasingly aggressive rivals in developing countries such as China and India where cheaper models are more popular.

It sold a better-than-expected 37.4 million iPhones in the March quarter, and 19.5 million iPads. But that was after many analysts had lowered their forecasts over the past month, responding to reports of delays in shipments and production, as well as decelerating consumer demand.

In the Greater China region, which Cook again stressed on Tuesday was a market with massive potential, Apple chalked up 8 percent revenue growth to $8.2 billion – the second slowest expansion of any region reported, after the United States.

The collapse of Apple’s stock price has incensed investors, spurring many, including Greenlight Capital’s David Einhorn, to call on the company publicly to dole out more of its cash directly to shareholders.

The tech giant’s expanded plan unveiled on Tuesday marks a $55 billion increase to a program unveiled just a year ago.

“This positive development represents a more shareholder friendly capital allocation policy and demonstrates the conviction of Apple’s management and board in the company’s future,” Greenlight said in a statement late on Tuesday.

But Wall Street zeroed in on Apple’s industry-leading margins, which it fears are under pressure as Samsung Electronics Co Ltd and other Google Android software adopters flood the market with lower-priced models.

Gross margins came in at 37.5 percent in the second quarter, while expectations were for 38.5 percent.

Apple’s shareholders will now get an annual dividend of $12.20 per share, making Apple one of the highest dividend-paying companies. With about 940 million shares outstanding, Apple will return $11.5 billion to shareholders over 12 months, an amount that exceeds the market value of 200 other corporations in the S&P 500.

In a rare move, the company also said it plans to raise debt for the expanded program but did not provide any details. Investors have urged the company to borrow rather than repatriate money from abroad, where much of its cash is parked, to avoid incurring heavy taxes.

Some investors cling to the hope that Apple will come up with a revolutionary product again this year, with speculation ranging from a “smart-watch” to some form of television format that can up-end the industry.

“It’s a transitional quarter,” said Destination Wealth Management’s Michael Yoshikami. “The new products are all coming out next quarter and China still hasn’t kicked in.”

Intersolar : MORE SOLAR POWER THAN EVER

Garmin Announces Vivosmart, a Fitness Tracker and Smartwatch in One