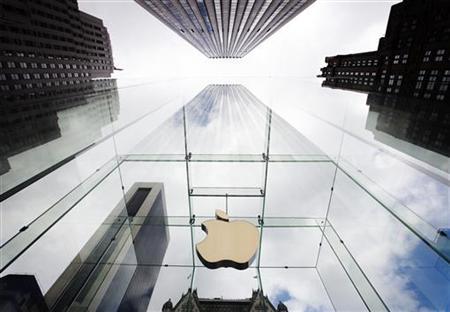 Shares of Apple Inc slid almost 4 percent on Wednesday to a five-month low as investors grew more uncertain about its ability to fend off unprecedented competition and untangle a snarled iPhone 5 supply chain.

Apple’s slide outpaced the S&P 500’s drop of about 2.4 percent the day after the U.S. election, putting the world’s most valuable technology company into bearish territory.

Long a mainstay of many fund portfolios, Apple on Wednesday lost 20 percent – $130 billion of its market value – since hitting a record high in September. A 20 percent slump signals a bear market for a stock to Wall Street.

Fund managers cited fundamental concerns about iPhone 5 supply and intensifying competition from resurgent rivals such as Samsung Electronics and Amazon.com Inc, as well as profit-taking after the elections.

Global shares fell with investors worried that the deep fiscal challenge facing President Barack Obama after his re-election could lead to a new recession.

Apple’s share price drop since September comes on the heels of torrid growth since the introduction of the iPhone in 2007 and the iPad in 2010, which upended the PC industry and carved out a new device segment.

But many investors question whether it can keep innovating and keep ahead of ever-more aggressive competition under new CEO Tim Cook and his chief lieutenants, installed after the death of its chief visionary and co-founder Steve Jobs last year.

Cook last week ousted veteran mobile software chief Scott Forstall – a protege of Jobs’ – in a surprise move seen as a loss of one of the company’s most valuable assets.

“We’ll be watching. What’s the future creativity from Apple? They’ve always been able to create new markets none of us realized we needed. It’s to be determined if they can continue to do that,” said David Readerman, portfolio manager at Forward Management, which has $5.5 billion under management.

“We started to trim our position in the September quarter. I’d expect that most growth investors who have been participating with Apple on this great ride from when the iPhone was launched have probably done the same. Companies go through growth cycles and we are in a hiatus. It may be three or six months here before we kick up in the next major growth cycle.”

In the near term, Apple is having trouble meeting robust demand for the iPhone 5. Chairman Terry Gou of Taiwan’s Foxconn Technology Group, Apple’s main contract manufacturer, said on Wednesday the company was “falling short of meeting the huge demand” for the phone.

Last month, Apple said it expects its industry-leading margins to shrink this quarter as new products – particularly the iPhone 5 that accounts for about half its revenue – have become more expensive to build.

“For now, everything has been refreshed and all the new products are out,” Tim Ghriskey, Chief Investment Officer of Solaris Asset Management said. “Then there are questions about whether margins have peaked at this company.”

PUTTING SOME THOUGHT INTO IT

Shares of Apple, whose latest quarterly results failed to meet Wall Street’s lofty expectations, slid as much as 4.6 percent to a low of $555.75 before ending the day down 3.8 percent at $558.0019.

Apple options were also most active on Wednesday. Traders exchanged 566,000 Apple calls and 448,000 puts near the close on Wednesday, above its daily average of 829,000 contracts, according to options analytics firm Trade Alert.

Beyond supply and management issues, analysts also remain leary of competition as rivals pile into the tablet market, setting up a holiday-season showdown of unprecedented scale.

Samsung, Google and Amazon are now challenging its supremacy in smartphones and tablets. Microsoft’s Surface, launched in October, marks the first time the software giant is gunning for Apple on hardware, its forte.

Apple’s tablet market share slid to 50 percent during the third quarter, while Samsung more than doubled its share to 18.4 percent, according to research firm IDC.

In light of the uncertainty, fund managers say investors may stop using Apple as a safe haven to park cash in a volatile market.

The American Funds Growth Fund of America was among the biggest mutual-fund sellers of Apple stock in the third quarter, dumping 2.74 million shares or 35 percent of its holdings.

However, among the biggest mutual-fund buyers in the third quarter – when the shares peaked – ING’s Large Cap Growth Portfolio more than doubled its holdings to over 515,000 shares as of Sept 30. The Columbia Value and Restructuring Fund doubled its slice of Apple over the same period to 225,530 shares.

The single biggest mutual-fund-holder of Apple stock as of the end of Sept 2012 was the Fidelity Contrafund with 12.4 million shares, according to Thomson Reuters data.

“There actually has to be some investment thought now, than just putting it (money) in Apple just because you don’t know where else to put it,” said Michael Yoshikami, founder and CEO of Destination Wealth Management. “Because of the uncertainty, you have to have a reason to own it.”

Future of Afghanistan belongs to its people: Hillary