Apple’s Steve Jobs is such a tease especially when it comes to the new Apple TV, which he has been talking about for some months now, even suggesting that Apple TV was a hobby at the D8 conference back in June and suggested that it might be time for name change and a revamp. 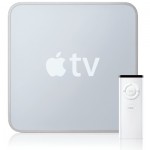 It now appears that the Apple will be looking to rebrand the service from Apple TV to iTV. While this may bring the hardware branding in line with their other devices that employ the infamous small “i”. It’s almost certainly going to ruffle feathers over at ITV, not to mention cause confusion for consumers. And will no doubt end in a legal battle in the courts in the UK.

Apple had originally planned to use the iTV name back at the service’s original launch in 2007, but backed out considering the significant status of the TV channel’s branding. It seems now Apple are more confident in their own brand, and will go ahead with the similar name nonetheless. Which we think is a risky route to go and we think ITV the channel would win any legal battle any ways in the UK.

The new iTV service, looks set to feature apps too, a clever move considering how much Apple make on micro-transctions. However it’s been suggested that the A4 chip employed by Apple in their TV boxes will be unable stream Full HD 1080p content, which will surely annoy high-def connoisseurs and will probably need to be revised.

So are ITV and Apple going to end up in court fighting over a “i” let us know below.

Ammonia used in many foods, not just "pink slime"

The Kingdom and the Kremlin: