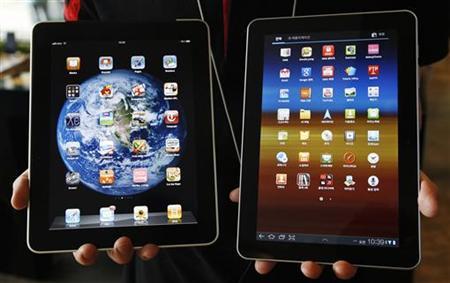 A U.S. judge said that Samsung Electronic’s Galaxy tablets infringe Apple Inc’s iPad patents, but added that Apple has a problem establishing the validity of its patents in the latest courtroom face-off between the technology giants.

U.S. District Judge Lucy Koh made the comments in a court hearing on Thursday, but has yet to rule on Apple’s request to bar some Galaxy products from being sold in the United States.

Apple and Samsung are engaged in a bruising legal battle that includes more than 20 cases in 10 countries as the two jostle for the top spot in the smartphone and tablet markets.

Earlier on Thursday, an Australian court slapped a temporary ban on the sale of Samsung’s latest computer tablet in that country.

Apple then filed a request in July to bar some Samsung products from U.S. sale, including the Galaxy S 4G smartphone and the Galaxy Tab 10.1 tablet.

Mobile providers Verizon Wireless and T-Mobile USA have opposed Apple’s request, arguing that a ban on Galaxy products would cut into holiday sales.

Samsung attorney Kathleen Sullivan argued that in order to defeat an injunction bid, Samsung need only show that it has raised strong enough questions about the validity of Apple’s patents.

Apple attorney Harold McElhinny said Apple’s product design is far superior to previous tablets, so Apple’s patents should not be invalidated by designs that came before.

“It was the design that made the difference,” McElhinny said.

Koh frequently remarked on the similarity between each company’s tablets. At one point during the hearing, she held one black glass tablet in each hand above her head, and asked Sullivan if she could identify which company produced which.

“Not at this distance your honor,” said Sullivan, who stood at a podium roughly ten feet away.

“Can any of Samsung’s lawyers tell me which one is Samsung and which one is Apple?” Koh asked. A moment later, one of the lawyers supplied the right answer.

Additionally, at the hearing Koh said she would deny Apple’s request for an injunction based on one of Apple’s so-called “utility” patents.

She did not say whether she would grant the injunction based on three other Apple “design” patents.

Koh characterized her thoughts on the utility patent as “tentative” but said she would issue a formal order “fairly promptly.”

“It took a long time to make that distinction,” Koh said.

Apple spokeswoman Kristen Huguet said, “It’s no coincidence that Samsung’s latest products look a lot like the iPhone and iPad … This kind of blatant copying is wrong, and we need to protect Apple’s intellectual property when companies steal our ideas.”

Design your own logo FREE