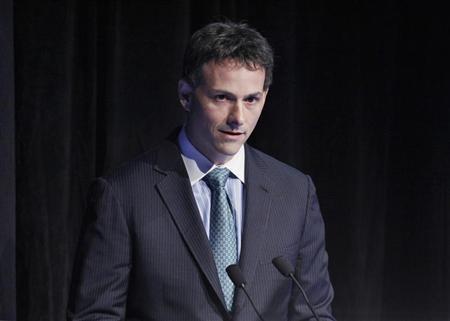 David Einhorn reiterated his arguments Friday that a judge should block a shareholder vote on Apple Inc’s proposal to eliminate its ability to issue preferred shares without investor approval, days before a court hearing.

In court filings in U.S. District Court in Manhattan, Einhorn’s Greenlight Capital attempted to rebut Apple’s arguments that the company’s proposal was “pro-shareholder.”

“Apple should not be allowed to substitute its judgment for its shareholders’ judgment, and should be enjoined” from letting the vote proceed, Greenlight said in a motion.

A hearing on Einhorn’s motion for an injunction against the February 27 vote on the proxy proposal is set for Tuesday. A spokesman for Apple declined comment.

Greenlight sued Apple last week as part of Einhorn’s larger effort to have the iPhone maker share more of its $137 billion in cash with investors.

As part of that goal, Einhorn has pushed for Apple to issue to its shareholders perpetual preferred stock with a 4 percent dividend.

Among the Apple proxy proposals up for a vote February 27 is Proposal No. 2, which would remove the company’s current system of issuing preferred stock at its discretion without a shareholder vote.

Greenlight’s lawsuit contends Apple violated U.S. Securities and Exchange rules by “bundling” three separate amendments to its charter into Proposal No. 2. While Greenlight supports two of the amendments, it does not back the one related to preferred stock.

Apple in a Wednesday filing argued the proposal was not bundled and that it had not forced shareholders into an unfair choice. It also noted Proposal No. 2 was supported by proxy advisory services Institutional Shareholder Services and Glass, Lewis & Co.

But Einhorn argued on Friday that ISS and Glass Lewis’s support is premised on the belief that eliminating so-called “blank check” preferred stock powers enables a company to defend itself against a takeover.

“In my view, Apple is not a realistic take-over candidate because of, among other things, its enormous market capitalization,” Einhorn wrote.

At Tuesday’s hearing, U.S. District Judge Richard Sullivan will also hear a separate challenge by an Apple investor from Pennsylvania to block not just the Proposal No. 2 vote, but also an advisory “say-on-pay” vote on executives compensation.

The investor, Brian Gralnick, contends Apple has not disclose enough details about how it made its decisions in awarding restricted stock units to certain executives.

Apple responded that its disclosures were adequate and appropriate.