Russia-Europe rocket blasts off on mission seeking life on Mars 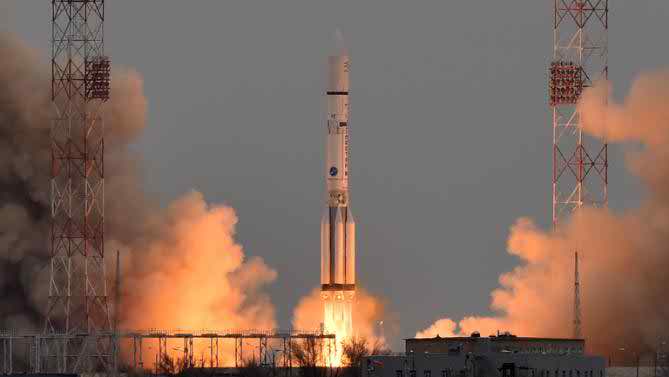 #thenewscompany – Two robotic spacecraft on Monday began a seven-month journey to Mars as part of a European-Russian unmanned space mission to sniff out leads to life on the Red Planet. Russia’s Proton rocket carrying the spacecraft launched into an overcast sky at the Russian-operated Baikonur cosmodrome in the Kazakh steppe at 0931 GMT according to plan, the Russian space agency Roscosmos and the European Space Agency (ESA) said. Roscosmos said the launch had taken place “successfully”.

ExoMars 2016, a collaboration between ESA and Roscosmos, is the first part of a two-phase exploration aiming to answer questions about the existence of life on Mars. The ESA has said the aim was to determine “whether Mars is ‘alive'”.

With its suite of high-tech instruments, the Trace Gas Orbiter (TGO), is expected to arrive at the Red Planet in October after a journey of 496 million kilometres (308 million miles). TGO will photograph the Red Planet and analyse its air, splitting off from Mars lander dubbed Schiaparelli days before entering Mars’ atmosphere. The second phase, a Mars rover due for launch in 2018, seems likely to be delayed over financial concerns.

One key goal is to analyse methane, a gas which on Earth is created in large part by living microbes, and traces of which were observed by previous Mars missions.

“TGO will be like a big nose in space,” said Jorge Vago, ExoMars project scientist. Methane, the ESA said, is normally destroyed by ultraviolet radiation within a few hundred years, which implied that in Mars’ case “it must still be produced today”. TGO will analyse Mars’ methane in more detail than any previous mission, said ESA, in order to try and determine its likely origin.

Schiaparelli — named after a 19th century Italian astronomer — will in turn spend several days measuring climatic conditions on the Red planet including seasonal dust storms and pave the way for the rover’s later arrival. Space has been one of the few areas of cooperation between Moscow and the West that has not been damaged by geopolitical tensions stemming from the crises in Ukraine and Syria.

NASA puts shuttle launch pad in Florida up for lease