2015 Hajj stampede : 11 Bangladeshis among the dead 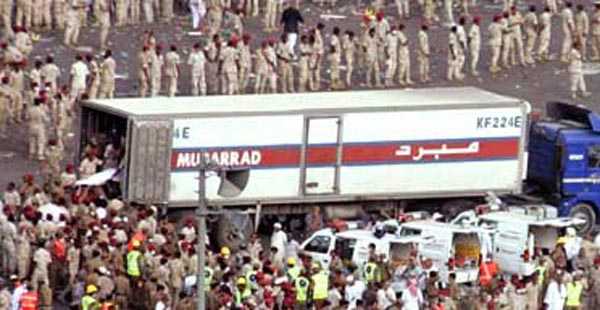 e-News® | The NEWS Company…ATH, Sept 28, 2015 : Says Hajj agency; details not available, information mainly from relatives,  At least 11 Bangladeshis were killed and 80 others injured in the Hajj stampede in Makkah on Thursday, Hajj Agencies Association of Bangladesh (Haab) said yesterday. Their identities were not immediately available.

Besides, 98 other Bangladeshis remain missing since the stampede that occurred when two large groups of pilgrims arrived together at a crossroads in Mina, about five kilometers from the holy city of Makkah. “Of the 80 injured, 30 have returned to their camps after taking primary treatment. But the condition of most of the 50 others is critical,” Haab President Ibrahim Bahar told The Daily Star.

Meanwhile, citing the Bangladesh Consulate General in Jeddah, the foreign ministry in Dhaka confirmed the identity of one victim — Md Shahidul Islam of Khulna. Two more dead bodies have been identified as Bangladeshis but their details were not available either. In addition, family members of a female Hajji Firoza Khanam confirmed her death in the stampede, said a foreign ministry statement.

Our correspondent said three of those killed are from the district. They are Tahera Begum, 73, widow of late Nurul Haque Master of Matiganj union of Sonagazi; her brother Nur Nabi alias Mintu, 69, of Nadona village under Bogadana union of Sonagazi; and Khaleda Akhter, 34, of Paglir Kul village under Chithalia union of Parshuram. Tahera Begum’s son Maeen Uddin confirmed the death of his mother and his uncle, citing his telephone conversation with Imam Uddin, who has been injured in the biggest tragedy that befell Hajj in 25 years. Khaleda’s death was confirmed by Hafez Jahangir of Parshuram. She went to perform Hajj with her husband Joynal Abednin, head clerk of Feni District Registrar. Joynal is Jahangir’s brother.

Another couple from Kalabagan in Dhaka — AK Fazlul Haque Chowdhury, 57, general manager of Bangladesh Gas Fields Company Ltd, and his wife Halima Akhter, 51 — were killed in the stampede, said their only son Farhan Naveed Chowdhury. “I came to know this from my uncle’s colleague who was with my parents,” Farhan, 24, told #thenewscompany.

It is not clear if this couple or the three people from Feni are among the 11 that the Haab believes to be dead. Bangladesh’s foreign ministry in its statement said medical teams were working at various hospitals in Makkah and collecting information about missing Hajjis. The Bangladesh mission in Saudi Arabia opened hotlines for the relatives to inquire about the Hajjis. The numbers are 00966537375859 and 00966509360082. However, Farhan Naveed said he tried these numbers several times but no one picked up the call.

Citing their personnel in Makkah, the Haab president said they feared more deaths of Bangladeshi Hajjis, but were not getting adequate information. “Hospitals are not allowing us in. So, we don’t have accurate information on the injured or the dead. “Relatives are calling us anxiously, but we are failing to provide them proper information,” Ibrahim said. Bangladesh’s Religious Affairs Minister Matiur Rahman, Secretary Chowdhury Md Babul Hasan and Haab leaders were scheduled to meet in Makkah yesterday evening to discuss the latest development.

Cheaper internet in the countryside of UK