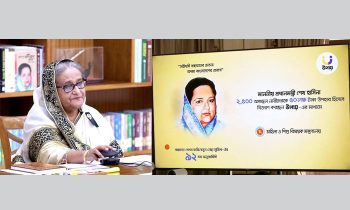 “The decisions of my mother on major political issues helped us a lot in achieving the independence,” the premier said as she distributed an annual award named after Begum Fazilatun Nesa.

Sheikh Hasina said Bangladesh’s emergence would have been impossible unless Bangamata would have taken a bold step against proposed inclusion of two more points to the Six-Point Demand while Bangabandhu was in Pakistani military captivity during the Agartala conspiracy case.

The premier said several Awami League leaders was willing to accept Bangabandhu’s release on parole while the trial of the case was underway, an idea that was strongly opposed by Bangamata who wanted his unconditional release.

Sheikh Hasina said if Bangabandhu would have come out accepting parole conditions, no fierce mass movement would have sparked forcing the then Pakistani junta to abandon the case, freeing the accused.

She feared in that situation all the accused would have been hanged on high treason charges, if not killed in captivity like their co-accused Sergeant Zahirul Haque during the trial.

“If Bangabandhu got released on parole, Bangladesh would have never witnessed its independence,” the premier said.

Five distinguished women were conferred with the Bangamata Begum Fazilatun Nesa Mujib Padak-2022 for their outstanding contributions to various fields at the function.

Women and Children Affairs Ministry staged the function at the Osmani Memorial Auditorium coinciding with Bangamata’s 92nd birth anniversary while the premier joined the event using the virtual platform from her Ganabhaban official residence.

The prime minister said that many leaders had pressured to declare independence during Bangabandhu’s March 7 speech in 1971.

But, Bangabandhu told the mammoth gatherings whatever was in his mind during the historic March 7 speech following the advice of Bangamata, she said, adding, “The opinion of my mother in this respect was given importance.”

The office of the Deputy Commissioner, Gopalganj also remotely connected to it.

Sheikh Hasina said her mother Begum Fazilatun Nesa Mujib was always beside her father Bangabandhu Sheikh Mujibur Rahman throughout his life including his student and political life as well.

“My mother was a ‘shadow companion’ of my father. She fully realised my father’s ideal and always helped him–my mother inspired him every time as she understood my father was working for realising people’s rights” she said.

The prime minister said Bangamata never wanted anything that a wife usually desires from her husband rather she fulfilled Bangabandhu’s every requirement to help him in working for the country and its people’s wellbeing.

She noted that Bangamata assured Bangabandhu of looking after their family.

“You (Bangabandhu) need not to pay heed to family affairs as I’m taking care of that,” the prime minister quoted her mother as saying.

Sheikh Hasina said Bangamata did everything in a systematic way adding she maintained a khata (book) of account where she put down every expenses of a month that included kitchen market, salary of teacher and school fee.

In absence of Bangabandhu, Bangamata even looked after the Awami League and its leaders and activists and she (Bangamata) even sold her ornaments to run the organisation, the premier said.

“My mother helped my father achieve the country’s independence through her noble sacrifice,” she added.

Referring to the Bangamata’s life and works, Sheikh Hasina urged the country’s womenfolk to follow the ideal of her mother devoting themselves to the welfare of the nation staying above the personal likings and disliking.

“I told all women of Bangladesh to work for welfare of the people being inspired by the ideal of Bangamata,” she added.

After opening a women hostel named after Begum Fazilatun Nesa Mujib in city, she asked the Women and Children Affairs Ministry to take measures in establishing hostels for working women at district and upazila levels to ensure their safe accommodation.

Each recipient got a medal made of 40gm of 18-carat gold, a cheque of Taka 4 lakh and a certificate of honour.

On behalf of the prime minister, State Minister for Women and Children Affairs Fazilatun Nessa Indira handed over the Padak introduced last year.

The premier also inaugurated handing over financial assistance and sewing machines among insolvent women across the country on Bangamata’s birth anniversary.

She unveiled the cover of a book written by her titled “Sheikh Fazilatun Nesa Amar Maa” at the function as well.

With the state minister in the chair, Women and Children Affairs Secretary Md. Hasanuzzaman Kallol gave the address of welcome while eminent writer Anwara Syed Haq delivered the keynote speech.

On behalf of the Padak recipients, Syeda Zebunnesa Haque spoke at the ceremony expressing her feelings.

Bangamata was born on August 8 in 1930 at Tungipara village in Gopalganj. She was killed brutally along with Father of the Nation Bangabandhu Sheikh Mujibur Rahman and most of his family members on the fateful night of August 15 in 1975.

The birthday of Bangamata is being observed across the country in a befitting manner.

Alongside the government, various political and socio-cultural organisations have chalked out elaborate programmes that included discussions to observe the day. Wreath was placed at her grave in the city’s Banani area this morning.

State owned Bangladesh Television and Bangladesh Betar in addition to other electronic media are broadcasting special programmes to mark the day.