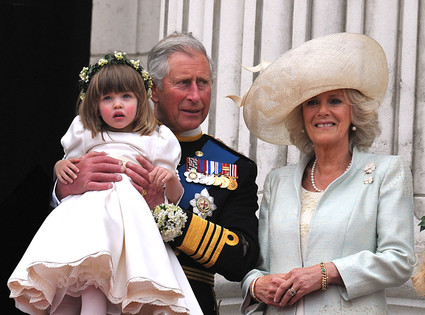 What better way to celebrate the season than with a shot taken from one of the biggest love-filled days of the year?

We speak, of course, of Prince William and Kate Middleton’s wedding, which is exactly what Prince Charles and Camilla pay tribute to in their just-revealed Christmas cards. Sure, it’s not exactly festive, and there may be no snowflakes or pine trees in sight, but hey—who among us is going to argue with this fatherly pride?

So, what holiday message did the future king deliver to his friends and family this year?

Palace officials released the card’s chosen image earlier today. And to anyone who owns a TV, has an Internet connection or lives in the world, it should be an immediately recognizable scene.

On the front, the simple card bears part of the Prince of Wales’ crest and Camilla’s cypher. Inside, it shows Charles, Camilla and the Duchess of Cornwall’s 3-year-old granddaughter and scene-stealing bridesmaid Eliza Lopes on the balcony on Buckingham Palace following Will and Kate’s nuptials.

So what tidings did they bear to their holiday card recipients?

“Wishing you a very Happy Christmas and New Year,” read the simple inside note, which is surrounded by a thin red border.