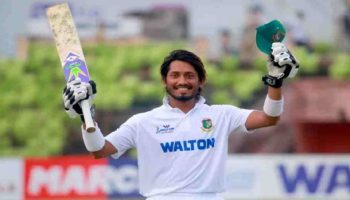 Bijoy would replace Yasir Ali Chowdhury who has been ruled out of the Test series against the West Indies due to a back injury.

The 29-year old Anamul, who last played a Test for Bangladesh in 2014, will leave for Antigua at the early hour of Friday. This means he won’t be the part of first Test, which starts tonight at Bangladesh time.

He will be available for his selection in the best XI in the second Test which begins in St Lucia on 24 June.

In his four-Test career, Bijoy had scored just 73 runs with the best of 22 runs, a performance that led his axe from the Test squad.

In the last edition of the Dhaka Premier League (DPL), a 50-over format, Bijoy scored more than 1100 runs at an average shed over 81 with nine fifties and three centuries, making him the first and only Bangladeshi batter to score 1000 or more runs in a List A event.

The outstanding performance in DPL forced his way back to the limited-over team when the squad was announced.

The first two T20s will be played at Windsor Park, Roseau, Dominica on 2 and 3 July.

The third T20 and all three ODIs will be played at Providence Stadium, Guyana on 10, 13 and 16 July.

10 Reasons It's Going To Get Worse For Research In Motion