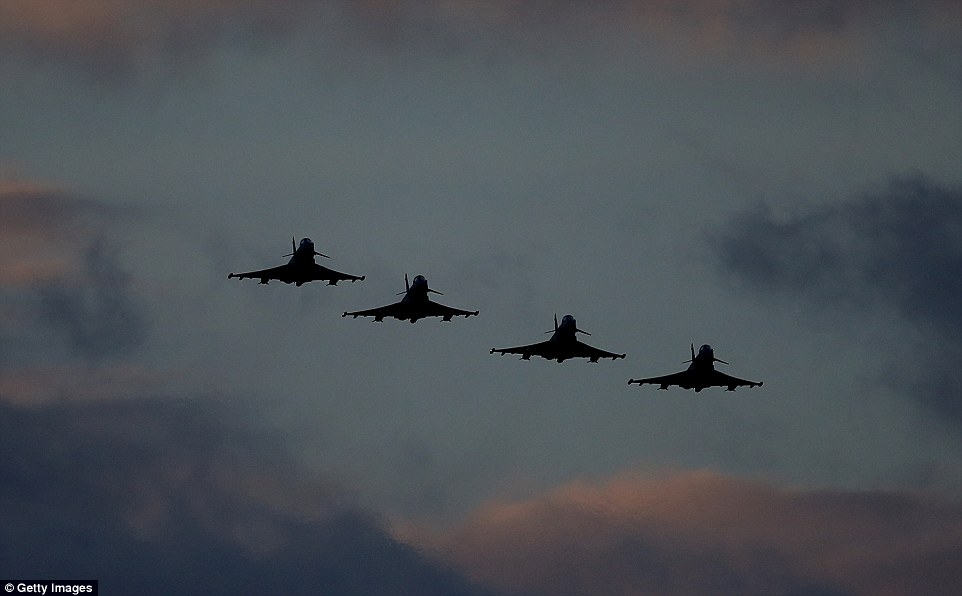 e-News® | The NEWS Company…Cyprus, December 04, 2015 : ISIS sniper team silenced by direct hit from a single Paveway bomb- RAF takes out terrorists firing on Iraqi troops near Ramadi as 150 British troops fly out to wage war in Syria which is set to last three years. RAF bombers have targeted oil fields in eastern Syria in the wake of Parliament voting to approve airstrikes, A total of six Tornado jets were sent into action from RAF Akrotiri in Cyprus yesterday equipped with 500lb bombs. They are now joined by two more Tornados and four Typhoons as well as 15 extra pilots and 135 crew members, Last night a team of ISIS snipers were killed by an RAF bomb after they started firing on Iraqi troops , Efforts to disrupt ISIS’s ability to sell oil could mean that it is more difficult to recruit and pay jihadist fighters, Defence Secretary Michael Fallon warned that the military campaign could last for ‘at least three years’ in total. This evening, two Typhoons and two Tornados set off from RAF Akrotiri to find IS militants to bomb in Syria and Iraq.

Four Tornado GR4 jets set out overnight from RAF Akrotiri in Cyprus, with two carrying out reconnaissance in Syria and two providing air support for the Iraqi army. The Ministry of Defence revealed that when a ‘terrorist sniper team’ began firing on Britain’s allies, they were ‘silenced by a direct hit’ from a 500lb laser-guided bomb dropped by one of the Tornados.  The RAF has transported 150 military personnel and eight additional bomber jets to Cyprus in preparation for further airstrikes within Syria, following the first raids yesterday which saw seven Paveway bombs dropped on ISIS territory.  This evening, two Typhoons and two Tornados set off from RAF Akrotiri to find IS militants to bomb in Syria and Iraq . The raids are said to have wiped millions off the value of oil held by ISIS, which diplomatic sources suggested could disrupt the group’s deadly terror network by reducing the funding it uses to pay the jihadist fighters who protect its territory in Iraq and Syria and carry out attacks on the West.

The UK Government is apparently targeting ‘anything to do with ISIS and oil’ as the first step towards defeating the terrorists in the aftermath of Wednesday’s night’s vote to authorise Syrian airstrikes. Defence Secretary Michael Fallon warned yesterday that the campaign ‘is not going to be quick’, suggesting that the conflict against ISIS could last at least three years in total. The MoD said in a statement today: ‘Royal Air Force aircraft have continued offensive operations against the Daesh terrorist network inside Syria and Iraq. 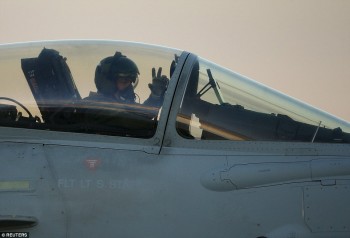 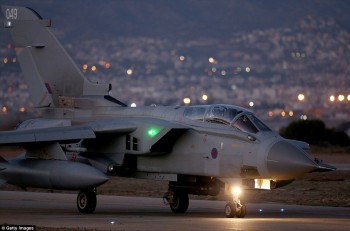 An RAF Tornado arrives at the British base in Cyprus, ready for operations in Syria 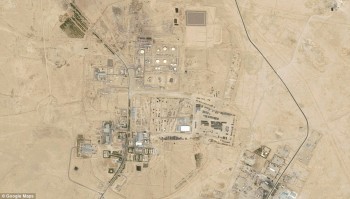 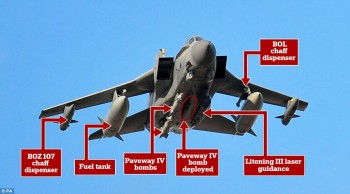 bombs and laser guidance attached to a Tornado jet after it had dropped one Paveway bomb in Syria, along with chaff dispensers which help to avoid the plane being detected by radar systems 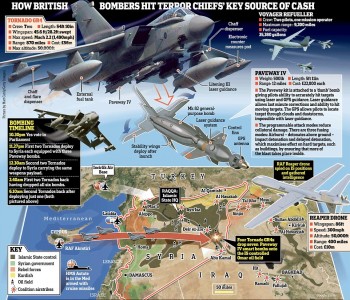 ‘Overnight on December 3/4, Tornado GR4s from RAF Akrotiri conducted missions over Syria and Iraq. ‘Two GR4s flew an armed reconnaissance patrol over eastern Syria, gathering intelligence on terrorist activity. A second pair of GR4s patrolled over western Iraq, where they provided close air support to Iraqi forces engaged in combat with Daesh in and around Ramadi. ‘A terrorist sniper team opened fire from a compound on Iraqi troops, but was silenced by a direct hit from a Paveway IV guided bomb.’  Yesterday four Tornado GR4 jets were sent from RAF Akrotiri to bomb the Omar oilfield, which provides around 10 per cent of ISIS’s oil supplies. The field has previously been hit by American forces – but an Arab diplomat suggested that the US had not done enough to disrupt the jihadists’ economic activity.

‘We have been giving the Americans the precise coordinates of the oil routes for months, but they do not seem to have done very much about it,’ the diplomat told the Daily Telegraph. ‘If you really want to damage Isil, then cut off their supply lines. If they don’t have the oil revenues then they will not be able to pay their fighters, and they will become a far less attractive proposition for would-be jihadists.’ A local activist told the Guardian: ‘Yesterday was very violent as it targeted anything that has to do with Daesh and oil.’ Experts have suggested that raids by Britain’s allies have already halved the amount of oil that ISIS is able to sell in order to finance its operations around the world.

After the initial raids, six Eurofighter Typhoons touched down at RAF Akrotiri in Cyprus to join the war against ISIS, after flying from RAF Lossiemouth in Scotland. Two Tornado warplanes also travelled from RAF Marham in Norfolk. The eight aircraft doubled the number of jets already stationed at the base, and were joined by 150 military personnel providing support for the raids. The Typhoons – which are not equipped with precision Brimstone missiles – are likely to be deployed over Iraq to drop bombs on larger targets and free up other Tornado jets for Syria. The Tornado GR4 aircraft offers a new capability for the coalition forces because the Brimstone missile it carries can track moving targets. This could include a jihadist on a motorbike travelling at 70mph and will be useful in places such as Raqqa, where targets have been difficult to isolate and catch.

Mr Cameron welcomed the start of operations, but warned the public that it would not end quickly. The Prime Minister said: ‘We are going to need to be patient and persistent. This is going to take time. It is complex, it is difficult what we are asking our pilots to do, and our thoughts should be with them and their families. ‘There will be strong support from our allies because they wanted us to join them in taking this action. ‘There will be very strong support from Muslim countries, Gulf countries, that have asked to us to take part in this action as part of a process that will help to deliver the political and diplomatic change that we need in Syria as well,’ added the Prime Minister.
A military source told the Evening Standard: ‘We are going after the head of the snake, but it’s also about going after its wallet’.

Mr Cameron boasted Britain is ‘safer’ after the House of Commons backed his proposal to extend military action in Syria by 397 votes to 223 – a majority of 174. Some 66 Labour MPs defied their pacifist leader Jeremy Corbyn to back the Tory government, after Mr Cameron warned Britain had to strike at the heart of ISIS or ‘wait for them to attack us’.  In Wednesday night’s mission, RAF Tornado GR4s, supported by a Voyager air refuelling tanker and a Reaper drone carried out airstrikes against the Omar oilfield, 35 miles inside Syria’s eastern border with Iraq, at an estimated cost of £300,000. Paveway IV guided bombs worth £22,000 each were used to conduct strikes against six targets.

The MoD said: ‘The Omar oilfield is one of the largest and most important to Daesh’s financial operations, and represents over 10 per cent of their potential income from oil. ‘Carefully selected elements of the oilfield infrastructure were targeted, ensuring the strikes will have a significant impact on Daesh’s ability to extract the oil to fund their terrorism.’  Mr Fallon authorised the action minutes after the Commons vote which followed a marathon 10-and-a-half hour debate. But he warned that the campaign would not be over quickly, telling BBC News: ‘The American estimate of the campaign in Iraq, which began last year, was that it would last at least three years and we’re not halfway through that yet.  ‘The operations there by the coalition have lasted just over a year and the Prime Minister has been pretty clear that this is going to be a long campaign to ensure that Daesh are thrown out of Iraq and that they are degraded and defeated in eastern Syria. This is not going to be quick.’  But he insisted Britain could not leave its national security to other airforces.

‘What was really important about the vote last night was that it confirmed that Britain is a serious ally, that we’ve come to the aid of France who requested us to help with our RAF planes, that we’ve responded to the call of the United Nations on all members of the United Nations to do something to suppress this terrorism and to eradicate the safe haven that the Daesh has. ‘So we’re now responding to that. It’s going to take time, but I’m very pleased now that right across Parliament last night there was a clear and decisive majority for action to tackle this menace – because it’s a menace to us in the UK.’  But after William Hague suggested that the West would have to consider deploying ‘small specialist ground forces’ to defeat ISIS and end Syria’s civil war, Mr Fallon added: ‘It is not at all likely that our troops will be involved.’ Asked whether Britain was safer after the vote, he said: ‘Yes. We were already involved in the fight against terrorism in Iraq and it made no sense to be able to attack targets one side of an artificial border that the terrorists themselves don’t respect and not attack the other side. ‘We were already in this fight, we have already seen our own citizens, holidaymakers slaughtered on a beach in Tunisia, one other British citizen killed in the attacks in Paris.’

Syrian monitoring groups confirmed that oil fields at Omar, Tanak and Jafra in the eastern province of Deir el-Zour were hit overnight. ISIS’s control of oil fields in north-east Syria has provided them with £320million of revenue which they use to fund their terror activities in the Middle East. The jihadist group is believed to work together with the Assad government – nominally its bitter enemy in the Syrian civil war – to maximise the profits it makes from its industrial operations. State employees have allegedly been ordered to work at ISIS-held energy facilities to ensure that the country’s infrastructure remains intact, with the terrorist factory bosses imposing a brutal regime.
Vladimir Putin recently accused the Turkish state of also buying oil from ISIS on an ‘industrial scale’ in the wake of the shooting down of a Russian plane over Turkey. Just half an hour before the Commons vote, Mr Corbyn sat stony-faced as his shadow foreign secretary Hilary Benn was cheered for a stirring speech in which he declared: ‘We must now confront this evil.’

The speech is thought to have swayed wavering Labour MPs, helping the government to a majority much higher than the predicted 100. The Lib Dems and DUP backed the airstrikes, while the Scottish National Party claimed the government had not made the case for war. Shadow chancellor John McDonnell praised Mr Benn’s oratory – but warned that the decision to bomb Syria could turn out to be as misguided as the conflict in Iraq. ‘It reminded me of Tony Blair’s speech taking us into the Iraq War,’ he told the Today programme on BBC Radio 4. ‘I’m always anxious that the greatest orators can lead us to the greatest mistakes.’

Tags: 000 each were used to conduct strikes against six targets.A team of ISIS snipers was killed by an RAF airstrike last night as Britain continues to step up the fight against the terror group which is set to last at least three years.Defence Secretary Michael FallonISIS sniper team silenced by direct hit from a single Paveway bombPaveway IV guided bombs worth £22RAF Akrotiri in Cyprussix Eurofighter Typhoons touched down at RAF Akrotiri in Cyprus to join the war against ISISThe Tornado GR4 aircraft