135 navy personnel off to Lebanon to join UN peacekeeping mission 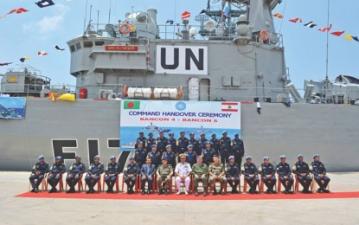 Commander Chittagong Naval Area Chief Staff Officer Captain AKMM Sherafullah saw off the navy members at the airport. The second group of another 135 navy members will leave for Lebanon on June 22 to join the UN peacekeeping mission. Currently, Bangladesh naval ships ‘Ali Haider’ and ‘Nirmul’ have been deployed as a member of multinational maritime taskforce in the Mediterranean Sea.

The two ships are working efficiently to prevent influx of illegal arms and ammunition into the territory of Lebanon. Those are playing an important role in enhancing Bangladesh’s image in the international arena through their activities. Two naval ships of Bangladesh ‘Osman’ and ‘Madhumoti’ took part in multinational maritime taskforce in the Mediterranean Sea for the first time in 2010 following the sincere efforts of Prime Minister Sheikh Hasina. After four years in 2014, those two ships were replaced by ‘Ali Haider’ and ‘Nirmul.’

Digital wallet soon in every pocket

New Spy Tech Keeps Satellites From Bumping Into Each Other