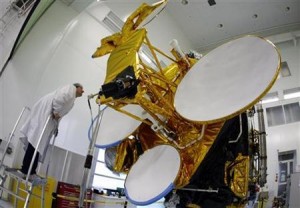 The United States has threatened action that could disrupt a French-led satellite maker’s supply chain, spurred by suspicion that it illegally used U.S. know-how or parts in spacecraft launched by Chinese rockets.

The State Department last month quietly warned the company, Thales Alenia Space, that export licenses needed by its U.S. suppliers might be denied, absent greater cooperation in an investigation of the matter, a department email obtained by Reuters showed.

License refusals could crimp the 2 billion euros ($2.65 billion) in worldwide civil and military sales that the company, known as TAS, posted in 2010.

They also could force a costly product-line revamp and strain U.S. ties with France.

The threat escalates the United States’ multi-year push for details on the design and components of a watershed telecommunications satellite that TAS has labeled as free of U.S. parts and therefore exempt from U.S. export controls.

The State Department holds that the satellite is not free of license-requiring U.S. parts, and that TAS illegally exported it to China, according to a department summary of actions in the case provided to two congressional committees.

The issue is especially sensitive because U.S. intelligence officials have accused Beijing of wide-ranging covert efforts to steal U.S. technology secrets for economic and military advantage over the United States.

Washington bars satellites containing U.S. parts and U.S. design know-how from launch by China as part of sanctions imposed after the 1989 crushing of the pro-democracy movement at Beijing’s Tiananmen Square.

Such U.S. technology is subject to so-called International Traffic in Arms Regulations, or ITAR, a set of State Department-enforced rules governing arms trade.

TAS describes its Spacebus 4000C2 as the West’s first commercial communications satellite without so much as a U.S. bolt, screw or piece of insulation subject to U.S. control. The company said it has sold eight such “unrestricted” satellites to international customers, five of them already launched by China with the other three to follow.

The U.S. warning of possible export-license denials was contained in a January 24 letter to TAS, a joint venture of France’s Thales Group, which owns 67 percent, and Italy’s Finmeccanica SpA Group, 33 percent.

The letter acknowledged TAS’s position that a French “blocking” law limits the company’s ability to cooperate with U.S. investigators.

The law bars data release that could undercut French sovereignty or be used in administrative or judicial proceedings abroad.

But the letter, as described by State Department officials in an emailed memo to U.S. congressional staff, urged TAS to reconsider its stance and hand over more data on the makeup of the satellite billed as exempt from U.S. licensing requirements.

Failure to provide the information within 30 days “would lead to consideration of license denials,” said the memo obtained by Reuters. It said the department had sought the data over the past two years.

This opens the way for possible blanket denials that could be “a big blow” to the Thales Group and to its U.S. suppliers, said George Grammas, who leads the international trade and export controls practice at Squire Sanders, a law firm. Grammas has served on an industry panel that advises the State Department on defense trade issues.

The Thales Group, headquartered in Neuilly-sur-Seine, generates close to 80 percent of its sales outside France, with operations in 50 countries, according to information on its website.

Export denials to a rival could be a boost to U.S. manufacturers such as Lockheed Martin, Boeing, Orbital Sciences and Space Systems/Loral, a unit of Loral Space & Communications , that have lost as much as half their global satellite market share in recent years

The U.S. share of global satellite exports has dropped from about 75 percent in 1995 to between 35 percent and 50 percent in the past seven years, according to Patricia Cooper, president of the Satellite Industry Association, a U.S.-based trade group.

Edgar Buckley, a Thales Group senior vice president and former NATO assistant secretary-general, said in an emailed statement to Reuters this week that TAS is trying to help the State Department “to resolve any outstanding concerns it may have.”

A French Embassy spokesman in Washington, Luis Vassy, said the embassy had been involved both to “explain the regulations in place in France with regard to the protection of sensitive items and technologies, and to detail the steps taken to make sure no restricted item or technology imported is unduly exported to a third party.”

“To our knowledge, no violation by TAS has been observed on ITAR components,” he said by email.

“We are concerned that the department is not moving aggressively enough to punish violations of” ITAR, the letter said.

The State Department is continuing to look into U.S. exports to TAS to determine whether the company improperly bundled U.S.-controlled technology into the satellites marketed as “ITAR free,” a department official said.

Department officials have been meeting with TAS and “continue gathering information with an eye toward resolution of this matter,” the official said.