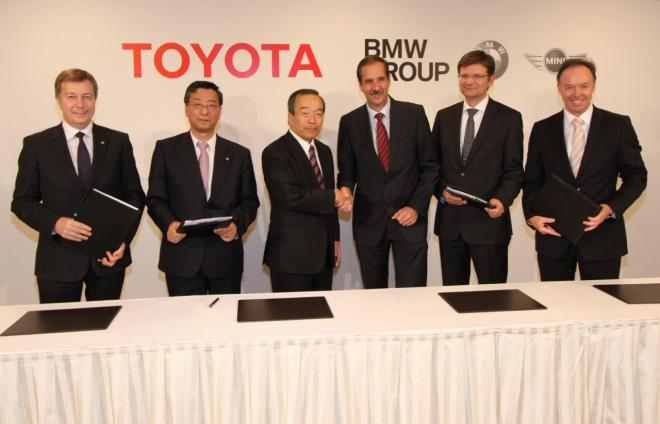 Toyota Motor Corp and BMW AG agreed on Thursday to join hands on a broad range of environmental technologies, forging a partnership between two engineering stalwarts in the increasingly competitive auto industry.

Under the agreement, the two will work together on lithium-ion battery research that is seen as key to electric cars, while the German premium brand will also supply 1.6 and 2.0 liter diesel engines to Toyota from 2014 in Europe. They will also identify possibilities for other projects.

The deal, announced at a news conference in Tokyo, comes as global automakers face ballooning research and development costs to meet tougher emissions and fuel-economy standards around the world. Car makers must also meet consumers’ varying preferences for vehicle powertrains across different regions.

Those needs have accelerated cooperation deals among carmakers, including between Toyota’s and BMW’s main rivals, Nissan Motor Co and Daimler AG, along with Nissan French partner, Renault SA.

“Fundamentally we are both engineering companies, so in many aspects we have found we speak the same language,” Toyota Motor Europe President and CEO Didier Leroy told the news conference.

“It is interesting to see what can be achieved when Japanese engineering meets European engineering and when the cooperation really works,” he said.

Many alliances in the auto industry have ended in failure due to the clash of corporate cultures, such as the two-year-old equity tie-up between another German-Japanese pairing, Volkswagen AG and Suzuki Motor Corp.

Toyota executives said the discussions with BMW started in April as its European business sought to shore up its diesel car line-up.

Toyota’s decision to seek a diesel supplier represents a reversal in strategy after it scrapped plans two years ago to develop 1.6-litre diesel engines with Japanese truck maker Isuzu Motors Ltd, in which it owns a 5.9 percent stake.

Two and a half years ago, President Akio Toyoda told his first news conference that Toyota would shift its focus in Europe to hybrids and away from diesel so as not to get “lost in the crowd.”

But Toyota has lost market share in Europe, partly due to a dearth of diesel cars, which make up about 55 percent of sales in Western Europe. Diesel engines use less fuel and emit less carbon dioxide than gasoline engines.

In the first 10 months of this year, Toyota’s sales in Europe fell 9.5 percent to about 430,000 vehicles, although that was partly due to supply constraints after Japan’s March 11 disasters. After peaking in 2007, Toyota’s sales have fallen in Europe, also hit last year by a recall crisis.

While virtually all carmakers acknowledge that hybrid technology will be necessary when regulations become stricter, it has never accounted for more than 2 percent of global vehicle sales and Toyota has not been able to leverage its strength in the technology to gain traction in Europe.

Toyota has diesel engines of its own, including 1.4 liter, 2.0 liter and 2.2 liter engines produced in Europe. Toyota said it would start using BMW’s 2.0 liter engine on one model first, in 2014, and expand the line-up thereafter. It gave no further details.

The agreement to collaborate on next-generation lithium-ion batteries meanwhile, will give BMW access to Toyota’s experience in the field. Toyota’s R&D chief, Takeshi Uchiyamada, said the partners will divvy up the fields of research to speed up research and save costs.

The two companies have not discussed swapping equity, another Toyota executive said, but added that if that became necessary at later stages of cooperation, it could be considered.