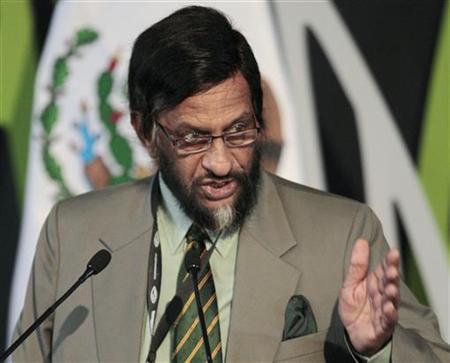 Global climate talks need to focus on the growing threat from extreme weather and shift away from political squabbles that hobble progress toward a tougher pact to rein in greenhouse gas emissions, the head of the U.N. climate panel said.

Negotiators from nearly 200 countries meet in Durban, South Africa, on Monday for two-week talks, with minimal expectations of major progress toward an agreement that will eventually bind all major economies to emissions caps.

Rajendra Pachauri warned the latest round of talks risked being bogged down by “short-term and narrow political considerations.”

“It is absolutely essential that the negotiators get a continuous and repeated exposure to the science of climate change,” Pachauri told Reuters in an interview late on Tuesday.

“If we were to do that it will definitely have an impact on the quality and outcome of the negotiations, after all these are human beings, they have families, they are people also worried about what is going to happen to the next generations.”

Pachauri heads the U.N.’s Intergovernmental Panel on Climate Change, which issued a report for policymakers on Friday saying an increase in heat waves is almost certain, while heavier rain, more floods, stronger cyclones, landslides and more intense droughts are likely across the globe this century.

“I am afraid the way the whole thing is structured loses sight of these realities,” Pachauri said of the talks.

The report comes after a year of costly weather disasters, from floods in Thailand to a string of multi-billion dollar disasters in the United States that have killed hundreds.

At best Durban is expected to result in modest steps toward a deal to lower emissions from factories, power stations and transport that scientists say are heating up the planet.

The negotiations have become a battleground between rich and poor nations on the question of how much cuts in greenhouse gases each should take, with developing countries insisting they should be allowed to emit more to grow out of poverty.

“When you have 400 million people who have no access to electricity, can you in the 21st century deny them the very basis of what the rest of the world has been living on for the last 150 years?,” Pachauri said of India.

Pachauri is an Indian scientist who was awarded the Nobel Peace Prize in 2007 with former U.S. Vice President Al Gore. He has since become a target for climate change skeptics who question the panel’s data.

The IPCC issues major reports every 5 to 6 years for policymakers that involves the work of thousands of scientists. The next major report will be released in 2013-14.

Talking in his cluttered Delhi office, Pachauri said climate change was already triggering more extreme weather and the world needed to prepare for more to come.

The IPCC report gave differing probabilities for weather events based on greenhouse gas emissions scenarios. He said the conclusions were clear.

“Given the fact that you are not going to bring about a turn-around immediately, then you really have to adapt to them in the short run.”

Global carbon emissions rose by a record amount last year, rebounding on the heels of recession.

The United Nations, the International Energy Agency and others say global pledges to curb emissions of CO2 and other greenhouse gases are not enough to prevent the planet heating up beyond 2 degrees.

“If we want to do that on a low-cost trajectory, then we will have to ensure that CO2 emissions peak no later than 2015, and that’s just 4 years away. In other words, beyond 2015 they will have to start declining.”

However, he was hopeful action at a national and grassroots level would kick in as people came face to face with the consequences of climate change.

“Irrespective of any treaty, if human society understands that something will have to be done, action will take place anyway.”

He praised South Korea and some European nations for green economy plans and said he believed China’s leadership was changing its thinking about its growth model.

BlackBerry maker wins vote of confidence ahead of BB10