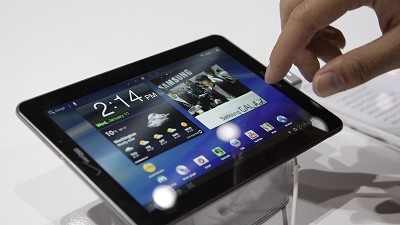 Samsung, Apple’s biggest competitor in the market for iPad-sized tablet computers, is updating its line to include a feature that lets a tablet act as a universal remote control for an entertainment centre.

The storage space on the new Galaxy Tab 2 will also be expandable with small memory cards.

Apple’s competitors are experimenting with different tablet sizes and features as they try to come up with a way to challenge the iPad’s commanding lead in sales.

Toshiba this week revealed a tablet with a 13-inch screen, essentially putting a laptop-sized screen in a tablet. The iPad has a screen that measures 9.7ins diagonally.

IPads accounted for nearly 60% of the tablet computers sold last year, according to research firm IDC.

Apple’s closest competitor in the overall tablet market is Amazon.com, but its Kindle Fire is half the size of the iPad and less than half the price, putting it in a somewhat different category.

Of the manufacturers that make tablets in the same size range as the iPad, Samsung has the largest share.

The iPad does not have expandable memory or the infrared diode that will let the Samsung’s models control a TV set or cable box. Instead, the chief new feature of Apple’s new iPad, released last month, is an ultra-high-resolution screen.

The updated Samsung models will not have higher-resolution screens, even though analysts believe Samsung is one of the sources for the new iPad screen.

Thuraya Opens Offices in the United States of America

Bid to encourage use of health apps