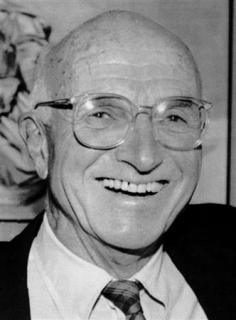 Dr. Joseph Murray, the surgeon who carried out the first successful kidney transplant and later won a Nobel Prize for his work in medicine and physiology, died on Monday in Boston at the age of 93.

Murray and his team completed the first human organ transplant in 1954, taking a kidney from one identical twin and giving it to his twin brother, opening a new field in medicine, the hospital said.

“The world is a better place because of all Dr. Murray has given. His legacy will forever endure in our hearts and in every patient who has received the gift of life through transplantation,” hospital president Dr. Elizabeth Nabel said in a statement.

Later in his career, Murray continued to search for ways of suppressing a patient’s immune response to prevent it from rejecting foreign tissue, eventually becoming a co-winner of the Nobel Prize for Physiology or Medicine in 1990.

“Difficulties are opportunities. This is a quote that sits atop my father’s desk at home. It reflects the unwavering optimism of a great man who was generous, curious, and always humble,” his son Rick said in a statement.

Murray began a career in medicine on graduating from Harvard Medical School in the 1940s, and developed an interest in transplanting tissue while working with service personnel injured in World War Two, according to the Britannica Online Encyclopedia.

He completed his surgical training at the Brigham and Women’s Hospital and later returned to join the staff and serve as chief of plastic surgery.

With broad interests beyond medicine, Murray said in a brief autobiography for the Nobel Prize organization that he and his extended family had been “blessed in our lives beyond my wildest dreams.”

“My only wish would be to have 10 more lives to live on this planet. If that were possible, I’d spend one lifetime each in embryology, genetics, physics, astronomy and geology,” he said.

“The other lifetimes would be as a pianist, backwoodsman, tennis player, or writer for the National Geographic.”

More than 600,000 people worldwide have received transplants since Murray’s innovation, the hospital said.