MH17 shot down by missile from rebel-held Ukraine 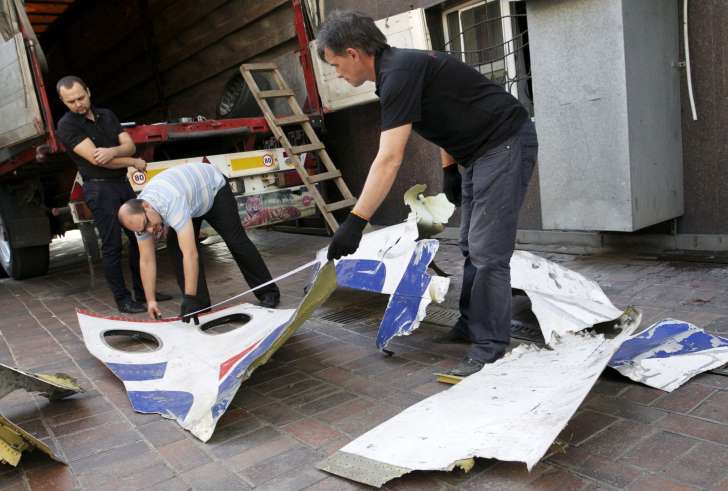 e-News® | The NEWS Company…Keiv, Oct 13, 2015 : A BUK missile brought down Malaysia Airlines flight MH17 last year over eastern Ukraine killing all 298 people on board, the official inquiry into the air disaster concluded Tuesday.

“This warhead fits the kind of missile that is installed in the BUK surface-to-air missile system,” the chairman of the Dutch Safety Board, Tjibbe Joustra, told a press conference.

International investigators have concluded that Malaysia Airlines flight MH17 was shot down by a Russian-made BUK missile fired from rebel-held eastern Ukraine, a Dutch paper said Tuesday just hours ahead of the official report. The findings into last year’s air disaster, due to be released at 1115 GMT by the Dutch Safety Board, are likely to exacerbate already strained ties between Russia and the West.

The official report, after a 15-month long investigation, seeks to end speculation about why the Boeing 777 broke up in mid-air killing all 298 people on board. Moscow has vehemently denied any involvement in the crash, pointing the finger instead at Ukrainian government forces who were battling a fierce rebellion by pro-Russian separatists in the east. Quoting three sources close to the investigation, the respected Volkskrant daily said Tuesday the inquiry had found the plane was hit by a BUK surface-to-air missile on July 17, 2014 as it flew from Amsterdam to Kuala Lumpur. Before officially unveiling the report at the Gilze-Rijen air base, Tjibbe Joustra, the chairman of the Dutch Safety Board, was first to brief hundreds of relatives of the victims gathered in a conference centre in The Hague.

“I don’t really know what to expect,” one of the relatives, Pierre Chardom, told AFP early Tuesday.

“Even if the report doesn’t name those responsible, it will still allow us to close some doors, to have some answers,” said Chardom, a Belgian who lost his 51-year-old brother Benoit in the crash.

According to Volkskrant, the report contains maps of the crash site, where the wreckage was strewn across fields close to the Ukrainian village of Grabove, in the war-torn area of Donetsk controlled by the rebels. It rejects Moscow’s contention that the plane was hit by a missile fired by Ukrainian troops as it flew at some 33,000 feet above the territory, the daily said. The Dutch Safety Board, which led the international team of investigators, has stressed its mandate was not to determine who pulled the trigger, amid a separate criminal probe by Dutch prosecutors.

But two sources told the Volkskrant “the BUK missile is developed and made in Russia.” “It can be assumed that the rebels would not be able to operate such a device. I suspect the involvement of former Russian military officials,” one told the paper.

Both Moscow and state-owned arms maker Almaz-Antey deny the claims. Russian Foreign Minister Sergei Lavrov on Monday said there were “many, many strange things” about the investigation, including the failure to get the International Civil Aviation Organisation (ICAO) to head it.

“There were no responses to the many questions that Russia sent to this investigative group,” he said. Analyst Peter Felstead of Jane’s Defence Weekly told AFP the airliner was most likely shot down “by mistake” by a BUK missile crew, who crossed the border to help the rebels counter Ukrainian air threats. The report was due to focus on four areas. It will examine “the cause of the crash”, the issue of “flying over conflict areas” and will try to answer why Dutch relatives waited two to four days before receiving confirmation that their loved ones were on board.

The report may also answer the haunting question of whether those on board knew they were about to die during the final moments of the flight, as some experts have suggested. Families of the dead will also be confronted with the harrowing sight of a partial reconstruction of the doomed plane, made from pieces of wreckage brought back from the crash site.

BUK-maker Almaz-Antey meanwhile is planning to unveil the “real reasons” for the MH17 disaster at a simultaneous press conference in Moscow. In June, the state-controlled manufacturer said that based on photos of the wreckage, a BUK was likely to have been used. But it argued it was a BUK-M1 which has not been produced in Russia since 1999.