BREAKING NEWS
Home Global News Hybrid cloud: What it is, why it matters

Hybrid cloud: What it is, why it matters 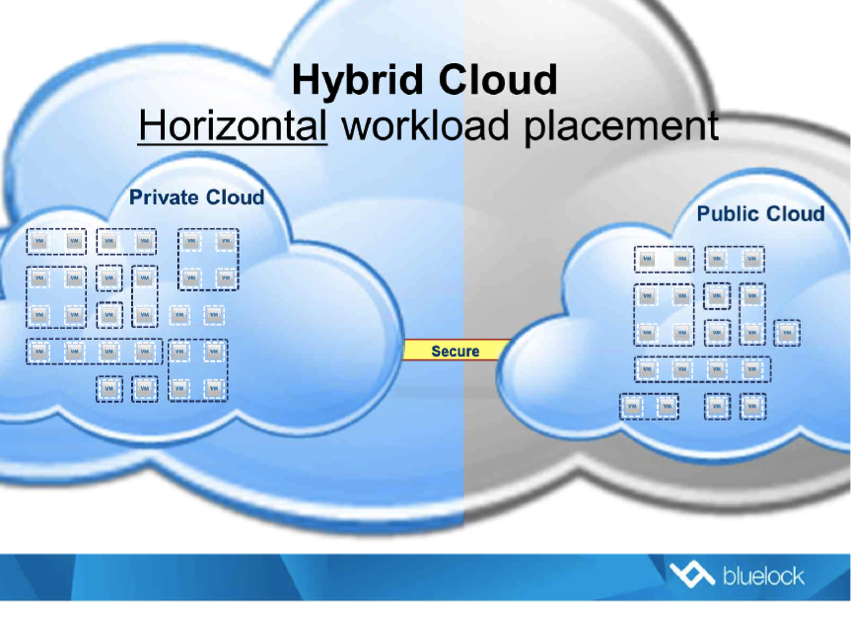 e-News® | The NEWS Company… : For several years, cloud computing has been the focus of IT decision makers and corporate bean counters, but the extremely security-conscious have been hesitant to move their data and workloads into the cloud. Now, with the underlying technology behind cloud services available for deployment inside organizations, a new model of cloud computing is gaining a foothold in business: the hybrid cloud.

What is hybrid cloud?

The hybrid cloud is the combination of a public cloud provider (such as Amazon Web Services, Google Cloud, or Joyent Compute) with a private cloud platform — one that’s designed for use by a single organization. The public and private cloud infrastructures, which operate independently of each other, communicate over an encrypted connection, using technology that allows for the portability of data and applications.

The precision of this definition is quite important: The public and private clouds in a hybrid cloud arrangement are distinct and independent elements. This allows organizations to store protected or privileged data on a private cloud, while retaining the ability to leverage computational resources from the public cloud to run applications that rely on this data. This keeps data exposure to a bare minimum because they’re not storing sensitive data long-term on the public cloud component.

It’s important to understand that the concept of a hybrid cloud is not simply connecting any arbitrary server to a public cloud provider and calling it hybrid. The private infrastructure must run some type of cloud services, such as NemakiWare, an open-source enterprise content management (ECM) software stack based on the interoperable CMIS standard, or Joyent SmartDataCenter, a cloud management platform for private and hybrid cloud deployments.

The benefits of going hybrid

One clear benefit of a hybrid cloud model is having on-premises, private infrastructure that’s directly accessible — in other words, not being pushed through the public internet. This greatly reduces access time and latency in comparison to public cloud services. With the looming risk of the consolidation of ISPs at the consumer/business level in the United States, the current halting of Net Neutrality, and the volleying of threats between ISPs and service providers, reliance on the proper functioning of the internet — a single point of failure that can bring down the normal operations of an entire company — is an unacceptably high risk.

Another benefit of a hybrid cloud model is the ability to have on-premises computational infrastructure that can support the average workload for your business, while retaining the ability to leverage the public cloud for failover circumstances in which the workload exceeds the computational power of the private cloud component.

This provides the added benefit of paying for the extra compute time only when these resources are needed. Accordingly, for businesses that have milestones throughout the year where a much higher than normal amount of compute time is needed (tax season, perhaps), extending to the public cloud is a cheaper proposition than building out a private infrastructure that sits idle for most of the year.

Building out the private end of a hybrid cloud also allows for flexibility in server designs. This gives companies the flexibility to provision rapid and archival storage at a likely lower cost. Combined with the announcement of new 19nm server-grade SSDs, and the Helium-filled 6TB drives from HGST, data storage — fast or slow — can be achieved without the use of backup tapes.

Although hybrid cloud provides a variety of advantages over the public cloud alone, it still suffers from the same privacy and security issues that plague the popular perception of public cloud platform providers. Allowing information to be transported across a network that can be subject to third-party interference or tapping is, to many organizations, an unnecessary and reckless security risk.

In addition, hybrid cloud — as well as public cloud — is a poor fit for circumstances in which data transport on both ends of the cloud is a mission-critical operation that is sensitive to the delay from transporting data across a network and the latency in ping times. For example, Tatsuya Kimura, the head of international affairs at the Japan Meteorological Agency (JMA), has questioned the ability to offload weather prediction data to the cloud.

Currently, the JMA supercomputer is an 847-teraflop system designed by Hitachi. This supercomputer helps the meteorologists determine whether a tsunami warning should be issued following an earthquake. It’s also used to predict earthquakes in the T?kai region, where the tectonic movement is particularly well understood. As these predictions are intensely time-critical, attempting to offload this computational workload to the cloud is not feasible.

Then there’s the issue of money. Organizations that have a thin IT budget probably can’t afford a rollout of a hybrid cloud solution. The upfront cost of the servers on the private end of the spectrum is — as one might expect of racks of server hardware — a substantial one, and the needs of smaller businesses likely to have small IT budgets can likely be served adequately using the services of a public cloud provider.

Hybrid clouds are frequently deployed in the financial sector, particularly when proximity is important and physical space is at a premium — such as on or adjacent to a trading floor. Pushing trade orders through the private cloud infrastructure and running analytics on trades from the public cloud infrastructure greatly decreases the amount of physical space needed for the latency-sensitive task of making trade orders. This is crucial for data security, as well. Threshold-defined trading algorithms are the entire business of many investment firms. Trusting this data to a public cloud provider is, to most firms, an unnecessary risk that could expose the entire underpinnings of their business.

Hybrid cloud technology is also widely used in the healthcare industry, as the need to relay data between healthcare providers and insurance companies for hundreds of thousands of patients is a daunting task. Compliance with HIPAA (the Health Insurance Portability and Accountability Act) in this regard is a regulatory hurdle, since compartmentalizing information to comply with HIPAA over not disclosing protected health information requires extensive permissions settings.

For similar reasons, law firms utilize hybrid cloud infrastructures, often as encrypted offsite data stores, to safeguard against the potential for loss due to theft, hardware failure, or a natural disaster such as a hurricane destroying the original documentation or evidence.

Retail sales is another industry that makes use of hybrid cloud services. Transporting sales information, and the analytics derived from that data, is a computationally intensive task. According to Bryan Cantrill, the CTO of Joyent, many retail firms are avoiding public cloud offerings from Amazon and Google.

Amazon, being the largest competitor to most (if not all) retailers, is seen as untrustworthy from their vantage point. And not all retailers want to share their sales analysis data with Google, which holds a majority of the search engine market in most of the world, combined with its extensive presence in advertising.

Why it’s a good idea

Using a hybrid cloud can greatly facilitate connectivity in the workplace. In addition to managing files, companies must integrate with various business processes, such as internal messaging, scheduling, business intelligence and analytics, and other CRM systems. Public cloud offerings alone do not readily (if at all) integrate with on-premises hardware. Devices such as printers, scanners, fax machines, and physical security hardware, like security cameras, fire, and CO? detectors, can be encumbrances to public cloud adoption. Rather than isolate these mission-critical devices from the rest of the organization’s network, using a private cloud component would be far more efficient.

With the hybrid cloud model, IT decision makers have more control over both the private and public components than using a prepackaged public cloud platform, especially for enterprise content management. These prepackaged software-as-a-service (SaaS) solutions face frequent redesigns and edits without prior notice or consent and, if poorly written, can break compatibility with pre-existing content.

Hybrid cloud adoption can be an effective strategy for a wide variety of businesses that have a tighter focus on security or unique physical presence demands. Although there is greatly minimized risk in a hybrid cloud model, allowing access from a public cloud has the remote potential of being insecure, or being the conduit through which data can be harvested. This, however, is true of almost any public network communication.

And while the upfront cost of server hardware for the private component of the hybrid cloud is high, the control that IT departments can wield over hardware selection and system design for the private component offers an invaluable way of properly tailoring resources to the needs of the organization. Assembling a private cloud to handle a standard workload, with burst compute offloaded to the public cloud, can be a long-term budget-friendly arrangement.

Ultimately, hybrid cloud allows organizations to leverage the capabilities of public cloud platform providers without offloading the entirety of their data to a third-party data center. This provides a great deal of flexibility in computing tasks, while keeping the most vital components within the company firewall.

The adage popularly attributed to Steve Wozniak applies here: “Never trust a computer you can’t throw out a window.” With the private cloud, organizations can keep their own window. As for throwing computers, employers may need to match Google’s free access to gyms on campus before data center techs can deadlift a server rack.

Tags: cloudHybrid cloud: What it isThe Art Of The Hybrid Cloudwhy it matters