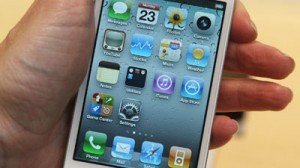 It is being reported that Apple’s iPhone 5 will be launched on October 4.

The All Things Digital website says the technology giant has a media conference scheduled for that day.

It is believed that the latest incarnation of the popular handset will be unveiled at the event.

If true, it would coincide with the launch of a new version of Apple’s iOS operating software.

There has been a wide range of speculation about the new phone, especially since a prototype was left in a tequila bar in San Francisco.

A longer life battery and a dual-core processor are among the rumoured additions to the handset.

The launch is the first significant public announcement since Steve Jobs stepped down as CEO in August.

The Apple founder was replaced by Tim Cook who is expected to give the iPhone 5 launch presentation.

More than 110 million iPhones have been sold since the product was launched in 2007.