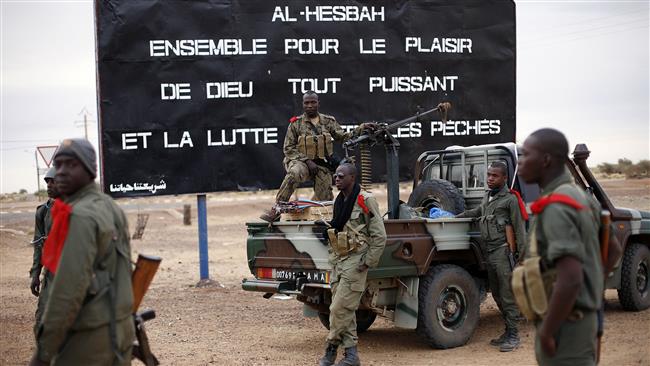 e-News® | The NEWS Company…BAMAKO, May 1, 2015 : Ten militants and nine soldiers died in clashes between the Malian army and the main Tuareg rebel alliance, the government said Thursday, raising fears for the country’s fragile peace process. The Tuareg-led Coordination for the Movements of Azawad (CMA) provoked the deadliest battle in almost a year between security forces and the rebellion as its fighters ambushed the central town of Lere on Wednesday.

“The provisional toll of the clashes is: armed forces — nine dead, six injured, six hostages, one damaged vehicle,” the ministry said in a statement. “Enemy side: 10 dead and 16 injured, two vehicles destroyed; one vehicle,arms and ammunition recovered.”

Defence Minister Tieman Hubert Coulibaly said Lere was under control and “encourages the armed forces to fulfil their duty with determination to the service of our country”, the statement added. A foreign security source confirmed the fighting had stopped late on Wednesday, adding there was “no winner, no loser”, with the rebels controlling the south of the town and the army dug in elsewhere. The rebels justified the ambush by citing a “flagrant violation of the ceasefire” in the Menaka region of Mali near the Niger border, where pro-Bamako troops seized positions on Monday.

“This act of legitimate self-defence is not meant to claim new territorial positions, which is why our forces immediately left Lere after the fighting,”a CMA spokesman said, claiming there were “a dozen prisoners and several dead” in the enemy ranks.

The CMA had warned on Tuesday it would assert its right to exercise self-defence. The assault came on a day of violence that started when militants opened fire on troops in the former Islamist stronghold of Goundam, 80 kilometres (50 miles) from Timbuktu, killing two soldiers and a child. UN Secretary-General Ban Ki-moon blamed fighters from the CMA and called for an “immediate cessation of the hostilities in northern Mali” following “serious ceasefire violations”. The Malian defence ministry accused the rebels of the “murder” of a platoon leader, his deputy and an “innocent girl”, saying it was an attempt to “collapse” the peace process.

– Prisoner swap negotiations –
A civilian source in an international team mediating peace talks between the government and the rebels said discussions were under way for “an exchange of prisoners between the two sides” following the battle for Lere. “The meharists have rebel prisoners and the rebels have wounded meharist prisoners. Direct negotiations are under way to secure their release,” the source said. Mali was upended by a coup in 2012 that opened the door for Tuareg separatists to seize the towns and cities of the vast northern desert with the help of several Islamist groups. The Tuareg were then sidelined by their one-time allies, extremists who imposed a brutal version of Islamic shariah in the region and destroyed historic buildings and artifacts in Timbuktu.

The Islamists pushed south toward Bamako, prompting France to deploy troops in January 2013 who drove them out, and Mali returned to democracy with the election in August of President Ibrahim Boubacar Keita. The country remains deeply divided, however, with the impoverished north home predominantly to lighter-skinned Tuareg and Arab populations who accuse the sub-Saharan ethnic groups that live in the more prosperous south of marginalising them. The recent violence comes amid assurances by the CMA that it was committed to a peace accord brokered by Algeria and due to be ratified at a ceremony in Bamako on May 15.

“I doubt the Algiers agreement can be signed by May 15 in these circumstances,” Yvan Guichaoua, a security analyst for the Sahel region and lecturer at the University of East Anglia in Britain, told AFP. “We’re into military ops. Even though informal discussions continue, it will take some time before military activities calm down.”

The government and a coalition of armed groups from the north known as the Platform have already signed the peace accord, negotiated under UN auspices over eight months. But the CMA has been holding out ahead of the ceremony, demanding an amendment guaranteeing political recognition for “Azawad”, the name used by the Tuareg for the northern part of Mali. MINUSMA chief Mongi Hamdi said he was “extremely concerned about the grave violations of the ceasefire under way in Mali at a crucial moment in the peace process”, according to a MINUSMA statement released on Thursday.

“I appeal to reason and responsibility of all actors involved, the stakes are too high.”

He added that all sides signing the Algiers accord would be “a historic opportunity for peace in Mali for the benefit of all Malians”. “No such thing will happen now. Now if the mediation and the Malian authorities still want to maintain a signature ceremony on May 15, they will sign a de facto void document,” Guichaoua said. Mali’s Tuareg and Arab rebels agreed to a ceasefire after taking control of the northeastern city of Kidal in May last year, dealing a humiliating defeat to the army, which saw 50 troops killed and another 50 wounded.

3G-4G-LTE : Mobile, Wireless Broadband in Bangladesh and beyond