BREAKING NEWS
Home Common Five years after bin Laden, Al-Qaeda down but far from out 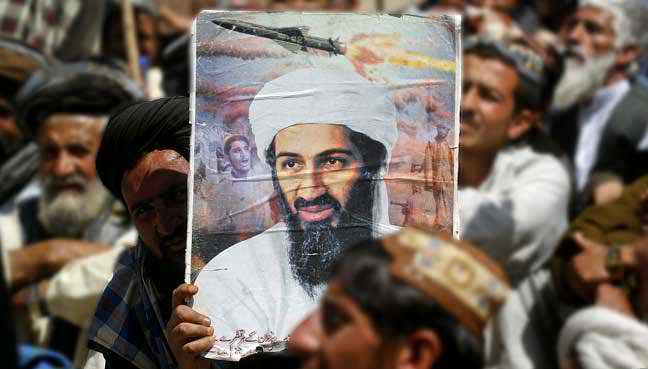 #thenewscompany – Five years after the killing of Al-Qaeda chief Osama bin Laden, the network he founded is far from dead even if it has suffered a series of setbacks. Replaced as the preeminent global jihadist power by the Islamic State group, Al-Qaeda nonetheless remains a potent force and dangerous threat, experts say. With last year’s Charlie Hebdo massacre in Paris and a wave of shootings in West Africa, Al-Qaeda has shown it can still carry out its trademark spectacular attacks.

And in Syria and Yemen its militants have seized on chaos to take control of significant territory, even presenting themselves as an alternative to the brutality of IS rule. By the time US special forces killed bin Laden in Pakistan on May 2, 2011, the group he founded in the late 1980s had been badly damaged, with many of its militants and leaders killed or captured in the US “War on Terror”.

Dissention grew in the jihadist ranks as new Qaeda chief Ayman al-Zawahiri struggled in bin Laden’s place, until one of its branches, originally Al-Qaeda in Iraq, broke away to form the Islamic State of Iraq and the Levant (ISIL).

After seizing large parts of Iraq and Syria in 2014, the group declared an Islamic “caliphate” in areas under its control, calling itself simply the Islamic State. IS has since eclipsed its former partner, drawing thousands of jihadists to its cause and claiming responsibility for attacks that have left hundreds dead in Brussels, Paris, Tunisia, Turkey, Lebanon, Yemen, Saudi Arabia and on a Russian airliner over Egypt.

Its self-declared “emir” Abu Bakr al-Baghdadi has won pledges of  allegiance from extremist groups across the Middle East and beyond, with especially powerful IS affiliates operating in Egypt’s Sinai Peninsula and in Libya. Jean-Pierre Filiu, a Paris-based expert on Islam and jihadist groups, said IS has been especially effective at using new technology to surpass its less tech-savvy rival.

“Al-Qaeda propaganda has become invisible on social networks thanks to the media war machine that Daesh has managed to successfully create,” Filiu said, using an Arabic acronym for IS. “Al-Qaeda has lost everywhere to Daesh, except in the Sahel” desert region of northern Africa, he said.

William McCants, of the Brookings Institution in Washington, agreed that Al-Qaeda had lost some ground to IS, but said the organisation has recovered. “Al-Qaeda has a strong showing in Syria and in Yemen,” he said.

In Syria the group’s local affiliate, Al-Nusra Front, is one of the strongest forces fighting President Bashar al-Assad’s regime, holding large parts of the northern province of Idlib. The local branch in Yemen, Al-Qaeda in the Arabian Peninsula (AQAP), has meanwhile seized significant territory in the south and southeast as the government struggles against Iran-backed Shiite insurgents who have taken the capital Sanaa and other areas. AQAP suffered a setback last week when Yemeni troops recaptured the key port city of Mukalla it occupied for more than a year.

But AQAP remains the key jihadist force in Yemen with thousands of members compared with only several hundred affiliated with IS, McCants said. AQAP, considered by Washington to be Al-Qaeda’s most well-established and dangerous branch, has also claimed responsibility for one of the group’s most important attacks abroad in recent years.

In January 2015 gunmen stormed the Paris offices of satirical magazine Charlie Hebdo with assault rifles and other weapons, killing 12 people in an attack claimed by AQAP. Another branch, Al-Qaeda in the Islamic Maghreb (AQIM), has carried out assaults on hotels and restaurants in Mali, Burkina Faso and Ivory Coast since November that have left dozens dead, including many foreigners.

The attacks in west Africa “have reasserted the regional presence of AQIM and shown its expanding reach,” New York-based intelligence consultancy The Soufan Group said in March. “AQIM has used the attacks to challenge the influence of the Islamic State, to demonstrate and build its local support and to show that it is united after earlier damaging divisions,” it said.

The International Crisis Group also argues that although IS has reshaped the jihadist landscape, Al-Qaeda “has evolved” and its branches in North Africa, Somalia, Syria and Yemen “remain potent, some stronger than ever”.

“Some have grafted themselves onto local insurrections, displaying a degree of pragmatism, caution about killing Muslims and sensitivity to local norms,” said the Brussels-based think-tank. Al-Qaeda chiefs in Yemen and elsewhere have condemned IS for some of its actions, including bombings of Shiite mosques.

The United States clearly still sees Al-Qaeda as a key threat, pursuing a vigorous drone war against the group in Yemen. The strikes have killed many senior operatives, including Al-Qaeda’s second-in-command Nasir al-Wuhayshi in June 2015. In March a US strike on an AQAP training camp in Yemen killed at least 71 recruits.

Writing for French news website Atlantico in early April, former intelligence officer Alain Rodier said that while IS may have stolen the spotlight, Al-Qaeda may be in a better long-term position. By rushing to declare its caliphate and establish its rule, IS has made itself an easier target, with thousands of its supporters killed in air strikes launched by a US-led coalition and by Russia. Its harsh rule has also alienated potential supporters, while groups like Al-Nusra have instead sought to work with local forces in areas under their control.

“The death of Al-Qaeda’s founding father in no way meant the end of his progeny,” Rodier wrote. “This jihad will last for decades.”

Tags: Al-Qaeda chief Osama bin LadenAl-Qaeda down but far from outFive years after bin LadenThis jihad will last for decades."