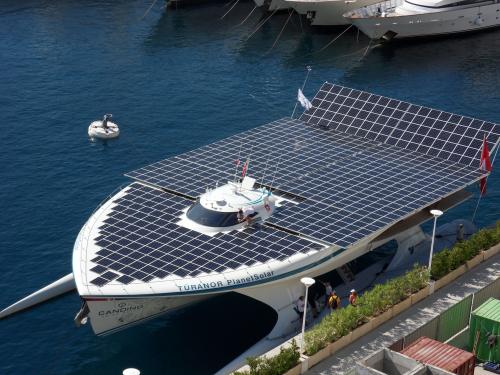 NEW YORK, June 19, 2013 (AFP) – The world’s largest fully solar-powered boat, “Turanor PlanetSolar,” docked in New York on Tuesday during a mission to study the effects of climate change on the Gulf Stream current.

Sponsored in part by the Swiss government, the 35-meter (115- foot) catamaran is crowned with solar panels that retract in port but open like a bird’s wings to take best advantage of the sun’s rays when at sea. In May 2012, the vessel became the first solar-powered vehicle to travel all the way around the globe.

It was an epic adventure that took 584 days and spanned more than 60,000 kilometers (37,282 miles). Weighing in at 90 tonnes, it travels at an average five knots. “Instead of being a museum somewhere in some harbor, the boat is now engaged in this second life,” said Gerard d’Aboville, the boat’s French captain, referring to the boat’s latest mission.

The ship set sail from La Ciotat in France just over two months ago. And since it has made stops including the southeastern US city of Miami on its information gathering mission on climate change and the Gulf current.

“Our main goal is to study the Gulf Stream,” he said. “I myself live in Brittany, west of France, and we are very worried. We all know that if the Gulf Stream changes, even a little bit, our climate will deteriorate quiet a lot.” 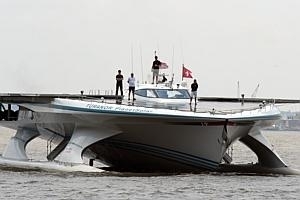 The Gulf Stream sends a huge mass of warmer water from the Gulf of Mexico to the North Atlantic, giving Atlantic Europe a relatively temperate climate for its latitude.

I also keeps areas it crosses in the Americas, such the West Indies, from being excessively arid. PlanetSolar will be cruising through August with stops planned in Boston, Newfoundland, Iceland and Norway.

“Our goal is to understand the complex interactions between physics, biology and climate … to refine climate simulation,” said Martin Beniston of the Institute of Environmental Sciences at the University of Geneva.

“Since the ship is powered by solar energy it does not emit any polluting substances that could distort the data collected on its 8,000- kilometer journey between Miami and Bergen, Norway,” he added.