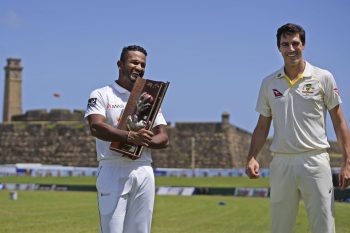 #thenewscompany : Sri Lanka skipper Dimuth Karunaratne won the toss and elected to bat against Australia in the opening Test of the two-match series on Wednesday.

The hosts handed a Test debut to leg-spinner Jeffrey Vandersay at the picturesque Galle International Stadium, which saw some rain in the morning.

“We know how the pitch is going to behave on day four and five, so we want to take advantage of the conditions,” Karunaratne said at the toss.

“Vandersay is playing. We are playing one seamer and three spinners.” Travis Head was declared fit to play leaving Australia unchanged from the team that secured a 1-0 series win over Pakistan in March with Mitchell Swepson retaining his place as the second spinner alongside Nathan Lyon.

Skipper Pat Cummins said Australia would have batted first had he won the toss and has picked pace bowler Mitchell Starc ahead of Josh Hazlewood. “We were looking to bat first as well,” said Cummins.

“Thankfully, Travis has pulled up well and is playing. Two seamers, two spinners and a couple of spinning all rounders. “It is weird seeing him (Hazlewood) sitting on the bench, he is a world-class
bowler, but we have gone with Starc.”

Sri Lanka’s cricket board paid tribute to the late Australia leg-spin giant Shane Warne before the start of play, with off-spin great Muttiah Muralitharan and former captain Arjuna Ranatunga among the island nation’s cricket icons in attendance. Warne, who died at age 52 of a suspected heart attack in March, took his 500th Test wicket at Galle in 2004.

The Test series will be played for the Warne-Muralitharan trophy.

Renault makes 'fresh start' in India to scale up sales