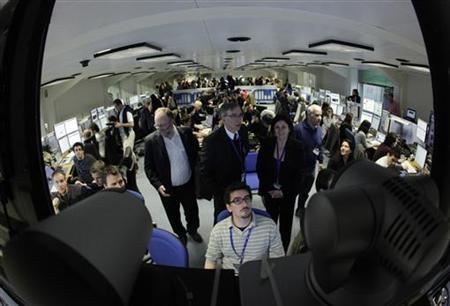 New research suggests neutrinos that appeared to break one of Einstein’s fundamental theories by travelling faster than the speed of light actually keep within the universal speed limit after all.

The latest measurement of the sub-atomic particles’ speed of flight from the CERN research centre in Geneva to Gran Sasso in central Italy contradicts an initial super-fast reading reported last September, which caused a scientific sensation.

Since then, more doubts have crept in about the original claims, especially after news last month that the first finding from the so-called OPERA experiment may have been distorted by faulty cabling.

The new analysis was done by researchers working on a separate experiment called ICARUS. Using independent timing data and measuring seven neutrinos in the beam sent from CERN, they found the time was exactly consistent with the speed of light.

Sandro Centro, an expert in high-energy physics and spokesman for the ICARUS experiment, said he believed the results of the new tests were conclusive.

“The speed of light and speed of neutrinos are the same,” he said in a telephone interview after the team’s findings were published online on Friday.

The earlier controversial OPERA study had clocked neutrinos covering the 730 km from CERN to Gran Sasso 60 nanoseconds – or 60 billionths of a second – faster than light.

“The evidence is beginning to point towards the OPERA result being an artifact of the measurement,” CERN Research Director Sergio Bertolucci said in a statement.

But he added that the scientific community needed to be rigorous and further tests were planned in May using more pulsed beams from CERN to provide the final verdict.

Many scientists had been skeptical about the original measurements, which flew in the face of Albert Einstein’s 1905 Special Theory of Relativity which states that nothing in the universe can travel faster than light, an assertion that underpins much of modern physics and cosmology.

The ICARUS team, working at the same Italian National Institute for Nuclear Physics (INFN) Gran Sasso laboratory, north-east of Rome, as colleagues on the OPERA project, had already queried the initial findings because the neutrinos did not appear to lose energy on their flight as would have happened if they had broken the light barrier.

“As it happens in science, someone repeats the same experiment and can come up with a different result,” Fernando Ferroni, INFN’s president said in a statement.

He said that after this latest results, doubts about the faster-than-light reading were “gaining more ground”.

The ICARUS scientists used a vast chamber of liquid argon to detect the arrival of the neutrinos at the Gran Sasso laboratory, which is dug deep in a mountainside.